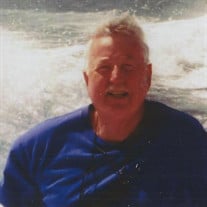 Harold W. Kendrick, 83, of Murrell’s Inlet, South Carolina, passed away on January 28, 2020, surrounded by family. He was born to parents Claude Wolfe and Frances Kendrick on June 2nd, 1936 in Jay, FL. Hal attended the University of Florida where he joined the Phi Gamma Delta fraternity. He described this time as the best days of his life. He joined the Army in 1960, became a battalion commander, and later joined the Reserves. Harold married the “love of his life”, Nancy, on June 17, 1961. Harold is survived by his daughters Melanie Smith and Jennifer Kendrick, as well as grandchildren Kendrick Smith and Allison Smith. Harold was predeceased by his parents, his sister Elizabeth Bankowski and brothers Sam Wolfe and John Wolfe. The Holy Spirit spoke to Hal one Sunday in a little church in Georgia, and he came down out of the choir loft to commit his life to Jesus. Hal was an elder in this church and in the next one we attended. Hal and Nancy went out on witnessing missions after attending Campus Crusade witnessing workshops. Hal's job experience was as a Controller with Sears, Financial Manager for Coker's Department Stores, Credit Manager and Real Estate Manager for Peebles Department Stores. His last job, before he retired, was as Store Manager for Peebles at Myrtle Square Mall. Retirement for Hal was pleasurable by playing golf, taking trips with his wife, and visiting his daughter in Virginia. He also volunteered for Mobile Meals, delivered flowers to shut-ins, taught a Bible lesion at Magnolia's Nursing Home, and served as a Stephen's Minister at First Presbyterian Church in Myrtle Beach. Hal led a remarkable life, as a young man who wanted to achieve an education, as a husband who took good care of his wife, as a father who was always "there" for his children, and as a Christian man who served his Heavenly Father. The memorial service will be held on Saturday, February 8, 2020, at 11:00 AM at the First Presbyterian Church in Myrtle Beach. In lieu of flowers, donations can be made to Samaritan's Purse: Samaritan's Purse, PO Box 3000 Boone, NC 28607. Sign an online guestbook at www.goldfinchfuneralhome.com Goldfinch Funeral Home, Beach Chapel is in charge of the arrangements.

The family of Harold W Kendrick created this Life Tributes page to make it easy to share your memories.

Send flowers to the Kendrick family.