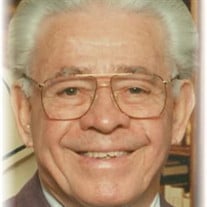 Conway... A graveside service for Henry Cephus Cannon, Jr., 96, will be held on Thursday, September 10, 2020 at 1:00 PM at Hillcrest Cemetery on Highway 544 in Conway, SC with Reverend Harold Lewis and Rev. Tresco Shannon officiating. Henry Cephus Cannon, Jr. passed away at his home on September 5, 2020 surrounded by his loving family. A lifetime resident of Conway, Henry was born on April 26, 1924 to the late Henry Cephus Cannon and Cora Martin Cannon. He was predeceased by sisters Nina Cannon, Evelyn Cannon, Ethel Hucks, Alma Waddell, Ruby Bellamy, Ernestine Moorman, and Wilma Carmichael; brothers Hallie Cannon and Quince Cannon. Henry attended Conway schools while also attending to the family dairy farm, where he developed his love for "fixing things." He was drafted in 1943, assigned to the United States Army Air Corp, 15th Air Force, 55th Bombardment Wing and stationed in Venosa, Italy until his honorable discharge in August, 1945. His interest and skill in mechanics lead him to Palmetto Chevrolet, Brown Pontiac/Buick and Bob Bible Honda where he won many friends. He was an active charter member of Trinity United Methodist Church since 1958. He was a member of the "Men's Class" and served on numerous committees and boards at Trinity. He was also very active in the Boy Scouts of America and served as one of the Scout Masters at Trinity for eight years. He helped several young men achieve Eagle Scout and God and Country Awards. He continued to support his community in numerous ways, always helping where he could, including the athletic program at Conway High School where his son-in-law was Head FB Coach/AD and his two grandsons played football and other sports. For 10+ years, he especially looked forward to attending "Board Meetings" at Donzelle's Restaurant on a regular basis until his health prevented him from doing so. Henry is survived by his wife of 71 years, Jacquelyn Huggins Cannon, his son Michael and daughter Patricia Cannon Jordan (Chuck) of Conway; Two grandsons, Cannon Jordan (Celie) of Florence, SC and Sawyer Jordan of Tampa, Florida; a sister Amy Fore of Mt. Pleasant and a number of special nieces and nephews. The Cannon family would like to express sincere appreciation to Hospice Care of SC (Tracie, Sue, Melanie, Amy, Kim) and the private caretakers (Kim and Cat) for their love, dedication and professionalism during Henry's illness. Memorials may be sent to Trinity United Methodist Church, PO Box 1072, 1317-B Third Avenue, Conway, SC 29528-1072 or the charity of one's choice. Please sign the online guestbook at www.goldfinchfuneralhome.com Goldfinch Funeral Home, Conway Chapel is serving the family.

The family of Henry Cephus Cannon Jr. created this Life Tributes page to make it easy to share your memories.

Send flowers to the Cannon family.