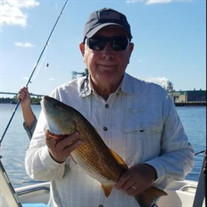 Herman Alexander Overcash, Jr., age 79, of Pawleys Island, SC passed away on December 29, 2021 surrounded by his family and friends. He was born to parents, Herman and Bonnie Overcash on December 10, 1942 in Charlotte, North Carolina. Herman graduated from North Mecklenburg High School and received a degree in mechanical engineering from N.C. State University. He was hired by Union Carbide Carbon Products and their subsidiaries immediately after graduation and was with them for 37 years. For four of those 37 years, he was General Manager of a plant in Vyazma, Russia. Herman loved his retirement in Pawleys Island. He loved time on the beach, fishing the rivers of Georgetown County and boating trips. Herman was a generous supporter of his Church and his community. He will be deeply missed. Herman was predeceased by his parents. He is survived by his wife Sally; his children Clayton Overcash, Candace Lyn Overcash (Robert Edwards), Therese Ann Vista and Thomas A. Vista; brother, Tommy Overcash (Annette), Barbara Sawyer, Cheryl Thompson (Ron); and many nieces, nephews and great-nieces and nephews. A memorial service will be held at 11:00 AM, on Friday, December 31, 2021, at Murrells Inlet Presbyterian Church with visitation to follow in the Church Fellowship Hall. In lieu of flowers, the family requests memorial contributions be made to Murrells Inlet Presbyterian Church, 4499 US Highway 17 Bypass South, Murrells Inlet, SC 29576 in Herman’s memory. The family wishes to thank close friends, Judy and Jim Baylus for all of their love and support, Melanie and Chuck Grainger for the excellent care provided to Herman and Sally and to the hospice team from Angelic Health. Sign the family’s guestbook at www.goldfinchfuneralhome.com Goldfinch Funeral Home, Beach Chapel is in charge of the arrangements.

Herman Alexander Overcash, Jr., age 79, of Pawleys Island, SC passed away on December 29, 2021 surrounded by his family and friends. He was born to parents, Herman and Bonnie Overcash on December 10, 1942 in Charlotte, North Carolina. Herman... View Obituary & Service Information

The family of Herman A. Overcash Jr created this Life Tributes page to make it easy to share your memories.

Send flowers to the Overcash family.