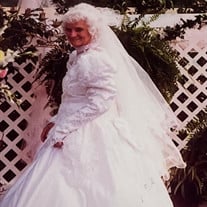 Irene Norris Hyman, 84, of Tabor City, NC passed away on February 6, 2022 at Grand Strand Medical Center in Myrtle Beach, SC. Irene was born June 19, 1937 in Loris, SC a daughter of the late Jettie Lee Norris and Florie Jane Fowler Norris. In addition to her parents, Irene was preceded in death by her first husband, Blanco Williams; her brother, Royce Norris; her granddaughter, Regina Buffkin; and her son-in-law, Jerry Buffkin. Irene attended schools in Tabor City and graduated from Tabor City High School. In her adult life, Irene worked as a farmer on her own farm where she raised her three children. She married her first husband, Blanco Williams, and they later divorced. She later remarried to Glennie Hyman. Irene was a member of Clarendon Baptist Church. Above all else, Irene was a kind, caring, and loving mother. She adored her children, grandchildren, and family and valued the time she spent with them always. Irene is survived by a large and loving family including her husband, Glennie Hyman of Loris, SC; her son, Stevie Williams of Whiteville, NC; her daughter, Gloria Buffkin of Tabor City, NC; her son, Michael Williams of Clarendon, NC; her brother, Harold Norris (Judy) of Tabor City, NC; her grandchildren, Karen Buffkin, Jeremey Williams, Brandon Williams, Glenda Williams, Christy Locklear, and Jaden Williams; as well as fifteen great-grandchildren and one great-great grandchild. A graveside service will be held at 3:00 PM Tuesday, February 15, 2022 at Forest Lawn Cemetery in Tabor City, NC. Rev. Larry Greenwood will officiate. Please sign an online guestbook at www.goldfinchfuneralhome.com Goldfinch Funeral Home, Loris Chapel is in charge of the arrangements.

The family of Irene Norris Hyman created this Life Tributes page to make it easy to share your memories.

Send flowers to the Hyman family.