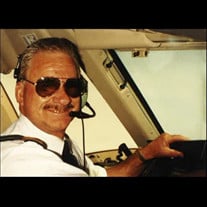 Jack Jay Weymouth, 85, of Myrtle Beach, passed away on March 26, 2022, at Brightwater Nursing Center with his family by his side. Jack was born October 3, 1936, in Saginaw, Michigan, a son of the late Merrill Holden Weymouth and Mildred Ellen Loebrich Weymouth. In addition to his parents, Jack was preceded in death by his wife, Peggy Walker Weymouth, his sister Joan Slagel, and his grandson, T.J. Morgan. In life, Jack proudly served in the United States Marine Corps and Marine Corps Reserves. In the Marines, he achieved the rank of Major. After his time in the military, Jack was a pilot for Delta Airlines for over 35 years. During his time with Delta, he logged over 27,000 flight hours. Jack had a lifelong passion for flying. Further, Jack was an active member of the Rotary Club of Lynchburg, Virginia and a loving father of two sons and a daughter. Jack leaves behind his loving family, including his dear daughter Jeanie Lynn Morgan of Myrtle Beach, SC; his son Nate Weymouth of Dallas, TX; and his other son James Weymouth (as well as his wife, Shelley Weymouth) of Atlanta, GA; his granddaughter Ashley Lynn Morgan (Josh Eddinger) of Myrtle Beach, SC; his granddaughter Elizabeth Weymouth of Atlanta, GA; and his great-granddaughter Trinity Lynn Eddinger of Myrtle Beach, SC. A funeral service to honor Jack will be held on Friday, April 1, 2022, at 5:00 PM at Goldfinch Funeral Home of Carolina Forest (325 Hinson Drive, Myrtle Beach, SC 29579). The family will receive friends during a visitation from 4 – 5 PM prior to the service. Memorial donations can be made in Jack’s memory to the Alzheimer’s Association - www.alz.org or to the Leukemia & Lymphoma Society - www.lls.org. Flowers can be sent directly to the funeral home for the service. Following the funeral service, Jack will be transported to Lynchburg, Virginia to be buried next to his wife Peggy at Fort Hill Memorial Park Cemetery. A graveside service will be held on Tuesday, April 5, 2022, at 2:00 PM at Fort Hill Memorial Park Cemetery (5196 Fort Ave, Lynchburg, VA 24502). Tharp Funeral Home of Lynchburg, Virginia will oversee the graveside service and interment. Goldfinch Funeral Home of Carolina Forest is in charge of arrangements and is honored to serve Jack’s family.

Jack Jay Weymouth, 85, of Myrtle Beach, passed away on March 26, 2022, at Brightwater Nursing Center with his family by his side. Jack was born October 3, 1936, in Saginaw, Michigan, a son of the late Merrill Holden Weymouth and Mildred Ellen... View Obituary & Service Information

The family of Jack Jay Weymouth created this Life Tributes page to make it easy to share your memories.

Jack Jay Weymouth, 85, of Myrtle Beach, passed away on March...

Send flowers to the Weymouth family.