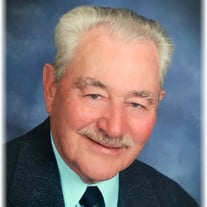 Conway… James W. Delaney, Jr., age 88, passed away at his home on Monday, May 31, 2021. Mr. Delaney was born in Albany, NY a son of the late James Willworth Delaney and the late Clara Julianna Schumacher Delaney. He was a First Lieutenant in the U.S. Army serving during the Korean War. Mr. Delaney was also a member of The Elks and the American Legion. He was a faithful member of St. James Catholic Church and the Knights of Columbus where he served as a Fourth Degree Knight and a Past Grand Knight. Mr. Delaney made a difference in the lives of children in Malawi by providing them with a well for clean drinking water. Along with his wife Barbara, he became close friends with three couples in the early 1960's and remained friends for many decades. The Delaney, Williams, Ellis and Dyke couples retired and relocated to Conway in the mid-late 1990's. Mr. Delaney will be remembered as a loving and giving man who was devoted to his Catholic faith, his family, and his friends. He was predeceased by two sisters, Ethel Foley and Beverly Nash, and his mother-in-law, Eleanor Stolba. Survivors include his wife of 62 years, Barbara A. Delaney of Conway; one son, Craig Delaney (Casey) of North Springfield, VA; two daughters, Carolyn "Carly" Schwartz (Ron) of Lenoir, NC and Brenda Winter (Chris) of Woodbridge, VA; seven grandchildren, Bryan Schwartz, Glenn Schwartz (Paige), Heleena Winter Denison (Mike), Christopher "James" Winter (Jordan), Claire Delaney, Andrew Delaney, and Conner Delaney; two brothers-in-law, Bruce Stolba (Dee) and Robert Stolba (Kay); one sister-in-law, Ann Marie Pax (Bob); and many beloved nieces and nephews. A funeral mass will be held at 10:00 AM Saturday, July 17, 2021 at St. James Catholic Church. Inurnment will follow at the St. James Columbarium. The family will receive friends on Saturday from 9:30 AM to 10:00 AM at St. James Catholic Church. In lieu of flowers, memorials may be sent to https://lessonswithlove.org/ or Crayons to Careers Scholarship via https://collegeaccessfairfax.org/online-donation/ Please sign an online guestbook at www.goldfinchfuneralhome.com Goldfinch Funeral Home, Conway Chapel is serving the family.

Conway&#8230; James W. Delaney, Jr., age 88, passed away at his home on Monday, May 31, 2021. Mr. Delaney was born in Albany, NY a son of the late James Willworth Delaney and the late Clara Julianna Schumacher Delaney. He was a First Lieutenant... View Obituary & Service Information

The family of James W. Delaney Jr. created this Life Tributes page to make it easy to share your memories.

Send flowers to the Delaney family.