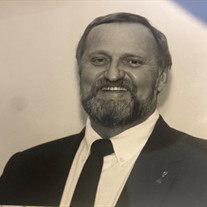 Conway, SC......James Earl Wilkison, age 81, died Thursday, May 20, 2021, following a long illness. He was born October 27, 1939, in New Castle, PA, son of the late Henry and Martha (Coulter) Wilkison. He grew up in Geneva, NY, and graduated from Geneva High School and SUNY Alfred with a degree in Civil Engineering. Jim worked for The New York State Department of Transportation for 35 years until his retirement where he worked on the design of many bridges and roads. He also designed the logo used for all bike trails throughout the state. Outside of his career, he was a gifted carpenter and built many decks for neighbors, his own sailboat, and a boathouse, now named the Jim Wilkison Boathouse, for the Rochester Rotary Sunshine Camp. A dedicated Rotarian, Jim was a member of the Brockport Rotary Club for many years. He served as President of the club 1983-84 and in 1997 served as District Governor of District 7120 in the Finger Lakes Region in New York. He continued his service with Rotary once he moved to Conway, SC, and was a member of the Rotary Club of Conway. He received many distinguished service awards, including The Paul Harris Fellow. Jim is survived by his wife of 58 years, Helene Wilkison (Solomon), his daughter Melissa, son-in-law David Wallach and one grandson Jacob and Hoss the puppy. Brothers Charles and Thomas, and many nieces and nephews also survive him. A graveside service will be held on Saturday, June 12, 2021, at 10:00 a.m. at Hillcrest Cemetery on Hwy 544 inConway. Memorial donations may be made in his name to Rotary International Foundation, One Rotary Center, 1560 Sherman Ave., Evanston, IL 60201-3698 or the Alzheimer's Association, 225 North Michigan Ave., Floor 17, Chicago, IL 60601. Please sign the online guestbook at www.goldfinchfuneralhome.com Goldfinch Funeral Home, Conway Chapter, is in charge of arrangements.

The family of James Earl Wilkison created this Life Tributes page to make it easy to share your memories.

Send flowers to the Wilkison family.