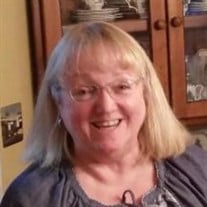 Jeanette V. Howard (Jeannie) passed away peacefully on Feb. 14, 2021. She was born on Feb. 7, 1957 to Alvin Teal Queen Jr. and Helen Jean (Bennett) Queen in Buckhannon, WV. She grew up in northern Virginia, living in the Gainesville, Haymarket, and Nokesville area. She graduated from Brentsville District High School, and earned an Associate in Arts and Sciences degree from Germanna Community College. Jeannie met the love of her life Kenneth Howard (Kenny) in high school, then waited patiently for five years before he finally wised up and asked her to marry him. They were married on Aug. 3, 1979. They were blessed with two wonderful sons, Roger and Matthew, who were Jeannie’s pride and joy. Kenny was a soldier in the US Army when they married, so they moved quite a bit. They went from Lawton OK, to Aberdeen, MD, then to Okinawa, Japan. On the return trip from Okinawa they stopped in Hawaii, a lifelong dream of theirs. They then went to Stafford, VA, Colorado Springs, CO, and then finally retired from the Army in Fredericksburg, VA. They moved to Myrtle Beach, SC in 2017. Jeannie loved to create things. She painted, quilted, knitted, crocheted, and did needlepoint. She was an avid collector of knick knacks, and would visit the Cracker Barrel often to see if there was something new or interesting she could find. She was a trained floral designer, and would create beautiful floral arrangements for friends and family. Jeannie enjoyed teaching. While living in Okinawa, she taught English to the local Japanese children. When she was in Fredericksburg, she was a substitute teacher for the Spotsylvania County schools, where she worked with elementary school children as well as children with special needs. Jeannie was devoted to her family. She loved being a wife, mother, sister, and aunt. She was the happiest at family gatherings over the holidays where she got to visit with many of her relatives. Jeannie was preceded in death by her mother Helen, her brother Alvin Teal Queen III, and her nephew Austin Tanner Queen. She is survived by her husband Kenny, her sons Roger and Matthew, her father and step-mother Teal Queen Jr. and Jean Queen, her two brothers Todd Queen and his partner Linda, and Rodney Queen and his wife Audrey, her sister Norma Boerger and her husband Curtis, her step-brother James Hibbs, and many aunts, uncles, nieces and nephews. Funeral services will be held in Lignum, VA, and Garden City, SC. Dates have not yet been established. In lieu of flowers, please make a donation in her name to a favorite charity.

Jeanette V. Howard (Jeannie) passed away peacefully on Feb. 14, 2021. She was born on Feb. 7, 1957 to Alvin Teal Queen Jr. and Helen Jean (Bennett) Queen in Buckhannon, WV. She grew up in northern Virginia, living in the Gainesville, Haymarket,... View Obituary & Service Information

The family of Jeanette V Howard created this Life Tributes page to make it easy to share your memories.

Send flowers to the Howard family.