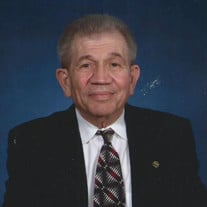 “You judge a man by how he treats his family.” By this classic Jim Reitano proverb, his life was an indisputable success. James A. Reitano went home to be with the Lord Jesus Christ on August 17, 2020. Jim was born July 15, 1939 in Lawrence, MA to Alfio and Rose Reitano. The middle of three brothers (Sonny and Dick), Jim was proud of his Italian heritage and his life as a Bostonian. At the age of 17, he enlisted in the Marine Corp and credits this decision to serve as one of the best of his life. Jim and his family moved to Columbus, Ohio in 1971 for his job with the Whirlpool Company. He chose to make his home in the village of Pickerington because it had a baseball diamond at its center. The perfect place to raise his children. A gifted salesman, Jim joined the Kappus Company in 1972 and in 1985 founded SESCO with his partner Jack Kappus. He worked until his retirement in 2000. Jim married Nancy Newton on July 27, 1974. She was the love of his life, who he claimed was the most beautiful woman he ever knew. He was a devoted father and grandfather, never enjoying himself more than when the family was all together. He is survived by his wife, his five children [Jim (Bridget), Rick, Cindy (Gary), Scott (Lori), and Joshua (Paige)], eleven grandchildren [Brittany, Nicholas, Tony, Brandon, Joey, Tyler, Mary Rose, Justin, Matthew, Lucy and Crosley], as well as five great grandchildren. In April of 1994, Jim was diagnosed with Parkinson’s Disease. In June 1995, Jim gave his life to Jesus Christ. These two events became the defining features of his later years, as Jim became a living witness to the Apostle Paul’s words in 2 Corinthians 4:16 -- “Therefore we do not lose heart. Though outwardly we are wasting away, yet inwardly we are being renewed day by day.” Jim spent the final decades of his life serving God and others in his work with Baskervill Food Pantry (which he helped found), Teach My People, Friendship Place, St. Elizabeth’s, and St. Paul’s Waccamaw United Methodist Church. Jim loved to golf, throw a party, tell a story, and laugh. Many, many people have described him as the best man they knew. He loved his friends and family. He dearly loved his wife, who cared for him so well. And he loved his God, who he now sees face-to-face. His was a life well lived. There will be a small service of interment at St. Paul’s Methodist Church in Pawleys Island, SC at 2:00 PM on August 24th. A traditional funeral service is scheduled for 2:00 PM on September 5, 2020 at New City Presbyterian Church in Cincinnati, Ohio. (This service will also be live-streamed at www.newcitycincy.org/funeral) In lieu of flowers, memorial gifts can be made by mail or online to Baskervill Food Pantry, 99 Baskervill Drive, Pawleys Island, SC 29585 (www.holycrssfm.org/baskervill-food-pantry) or Rock Steady Boxing/ Fighting back Against Parkinson’s, 7440 N. Shadeland Ave, Suite 202, Indianapolis, IN 46250 (www.rocksteadyboxing.org)

The family of Jim Reitano created this Life Tributes page to make it easy to share your memories.

“You judge a man by how he treats his family.” By this classic...

Send flowers to the Reitano family.