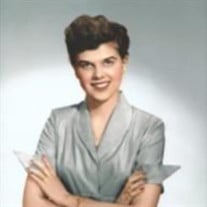 Joan Brocco, 85, of Pawleys Island, died Saturday July 10, 2021 after suffering from heart and lung complications. Born on September 22, 1935 in Brooklyn, NY, she was the daughter of the late Michael Piccininni and Anna Lunis. Raised by a single mom, Joan was an exceptional student possessing both beauty and brains. A die-hard Brooklyn Dodger fan, she was a contestant in the Miss Subway beauty pageant and worked for Brown Brothers before meeting and marrying her husband, the love of her life, in 1960. The two moved to the house they bought on Long Island where Joan raised two boys, became an exceptional cook, and provided stability in the home as the wife of a firefighter who often worked nights and holidays. When her children came of age, she returned to work as an Executive Assistant for Julius Wile Sons & Company. After retiring, she and her husband moved to Pawleys Island, SC where they lived together for 24 years until his passing in 2018. Known for her main courses of Lasagna and Shrimp Scampi and dessert specialties of Cheesecake, Rice Pudding, Pineapple Upside-Down Cake, and Orange Creme Brulee, Joan and her husband often hosted gatherings of family and friends who never left hungry. Survivors include her sons John (Cheryl) and Michael Brocco; grandson Aidan Brocco; brother Michael Piccininni (Theresa); sister-in-law Marie DeFinis; nieces Jeanette Fuoco (Joe) and Claire Haas, and nephew David Whelan (Anna); as well as the many friends whose life she touched. The service for Joan will be held at 11 o'clock on Saturday July 17th at Precious Blood of Christ Church, 1633 Waverly Road, Pawleys Island, SC 29585. In lieu of flowers, please make donations to St. Jude Children's Hospital (www.stjude.org) Sign an online guestbook at www.goldfinchfuneralhome.com Goldfinch Funeral Home, Beach Chapel is in charge of the arrangements.

Joan Brocco, 85, of Pawleys Island, died Saturday July 10, 2021 after suffering from heart and lung complications. Born on September 22, 1935 in Brooklyn, NY, she was the daughter of the late Michael Piccininni and Anna Lunis. Raised by a single... View Obituary & Service Information

The family of Joan Brocco created this Life Tributes page to make it easy to share your memories.

Send flowers to the Brocco family.