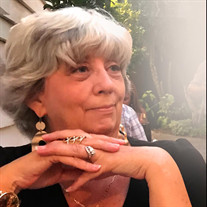 Pawleys Island, SC…… Joan L. Campbell, passed away suddenly at the age of 69 on Saturday, February 5, 2022, with her family by her side. Joan was born June 9, 1952, in Union, NJ. the daughter of the late Herbert and Dorothy Leopold Olland. In life, Joan did what she loved, which was acting. She loved to be on stage, won many awards and was a star performer. Her love of acting and stagecraft started when she was a little girl growing up in Union NJ, where she would often go to NYC to see Broadway shows. This led her to pursue acting in high school and college productions and then, as an adult, doing community productions in the Canton Ohio area, where she lived with her family at the time. Surprisingly, Joan was a shy and introverted person off stage. As Joan grew up in NJ, going “down the shore” to the South Jersey beaches was the highlight of her life. She always had an innate love for the beach, and that is what led her to exclaim “I’m home,” when she moved to South Carolina’s Litchfield by The Sea community. Joan also loved animals, especially dogs. And when she and her husband John moved to Pawleys Island, they especially enjoyed walking on the beach with their dogs, Jazz and Scarlett. In addition, Joan spent many hours as a S.C.U.T.E. Sea Turtle Protection Volunteer. She also had a great sense of humor and was a loving, sweet woman who was always fun to be around. Joan truly loved life. However, being 6 feet tall was something that always concerned her. That is until a friend once told her “If you can’t change it, paint it red.” And that was the philosophy she lived by, enjoying upscale fashion and a special verve for life. Joan was preceded in death by many of her beloved dogs. Especially her treasured Carolina dog Jazz, who passed away in October 2021. Joan is survived by her best friend, and love of her life, her husband of 12 years, John Campbell; her children Jennifer (Bozman) and Michael Harbaugh, grandchildren Dillon and Morgan Harbaugh, of Canton, Ohio; Michael and Wendy Bozman and grandchild Emma Bozman of Evans GA; Douglas and Nikki Bozman of Ft. Bragg, NC; Step children Keeley Capriotti, with children Oliver, Millie and Theodore Capriotti of White lake, MI and Connor Campbell of Wixom, MI. Joan is also survived by her loyal companion dog Scarlett, who seems lost without her. Joan also had many friends in Pawleys Island and NE Ohio. She will be deeply missed by all who knew her. Memorial may be made in Joan’s name to SCUTE of South Carolina. Goldfinch Funeral Home, Beach Chapel is assisting the family.

The family of Joan L Campbell created this Life Tributes page to make it easy to share your memories.

Send flowers to the Campbell family.