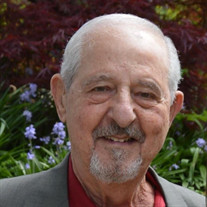 Joseph “Joe” Fiorentino, most recently a resident of the Brightwater community, went to his heavenly home on Aug. 14, 2021. Joe passed away in the company of his sons, Steve and Rob, at the McLeod Hospital in Little River, SC, after a courageous battle with COVID-19. In retirement, Joe and his wife, Josie, moved to Indigo Creek of Murrells Inlet, SC, from Riverdale, NJ, in 1996. Born Feb. 6, 1934, at Greenpoint hospital in Brooklyn, New York, Joe was the son of Salvatore Fiorentino whose father immigrated from Sciacca, Sicily, and Mildred “Millie” Aquino whose mother immigrated from Italy. Joe attended Brooklyn Tech and graduated from the New York School of Printing in 1952. After a neighborhood courtship that included many soda fountain and movie dates, he married his childhood sweetheart and the “Love of his Life,” Josephine “Josie” Sicher in 1955 at St. Joseph’s Catholic Church in Brooklyn, NY. They honeymooned after a train ride to the Poconos at Vacation Valley in Echo Lake, PA. Joe and Josie raised their two sons in Riverdale, NJ, and East Long Meadow, MA, before retiring to South Carolina. Joe was a devoted family man who was actively involved with his sons and his community -- from the Indian Guides to the Boy Scouts -- never missing one of his sons’ events even with his round-trip commute into Manhattan. He served on the Riverdale Board of Education for eight years, including being elected President. From humble beginnings as a shoe-shine boy in the Brooklyn Navy yard earning 10 cents a shine, Joe went on to have a distinguished 43-year career at the Wall Street Journal where he was employed out of trade school. He rose through the ranks and ultimately managed and mentored many over his career. He retired in 1995 at a special gathering at the Windows on the World in the north tower of the former World Trade Center. During retirement, he enjoyed golfing weekly with his friends and golf leagues. Joe was a member of the Elks and a lifetime member of the Loyal Order of Moose. He was particularly passionate about the Order of the Sons of Italy, Lodge 2662, in Myrtle Beach, where he was an active member since 1998. He served on the arbitration committee and the acquisition and build-out teams of the current lodge. He was known for his enthusiasm and skill in bocce. In fact, Joe initiated bocce leagues everywhere he resided. He loved being with his family, especially his grandchildren. He enjoyed family vacations and visits, Christmas with family, drawing, painting Easter eggs, pasta and ravioli making (and eating), crabbing, fishing, and was a sandcastle builder extraordinaire. In 2008, Joe and “Jo” celebrated their 50th wedding anniversary at a gathering in New Jersey with family and longtime friends. They traveled to Italy with their boys for a vow renewal in Segno Val di Non where they were surrounded by their Italian relatives. Joe’s devotion to family was his love and is his legacy. Joe is predeceased by his wife of 63 years, Josie; one of his sisters, Jennie Fiorentino; and his parents. He is survived by his two boys - Steve Fiorentino and his wife Robin of Algonquin, IL, and Rob Fiorentino and his wife Angie of Annandale, NJ; three grandchildren, Stephanie (22), Abby (20) and Joseph (18); and his sister, Fran McCabe, of Queens NY. The family requests that you honor Joe by spending time with your children and grandchildren and always placing FAITH and LA FAMIGLIA first. That is what Joe would wish for you! A memorial service will be held at St. Michael’s Catholic Church in Garden City, SC, on Fri., Sept. 10, 2021, at 10:00 a.m., followed by a celebration of life at Sons and Daughters of Italy Lodge 2662, 7957 Moss Creek Road, Myrtle Beach. A visitation will be held at Goldfinch Funeral Home, Beach Chapel, Murrells Inlet, 11528 Highway 17 Bypass on Thur., Sept. 9, from 5 p.m. to 8 p.m. The family asks that memorials be sent to the Sons and Daughters of Italy, Myrtle Beach Lodge 2662, 7957 Moss Creek Road, Myrtle Beach, SC 29588 or St. Michael’s Catholic Church, 542 Cypress Ave, Garden City, SC 29576. Memories and condolences may be shared at Goldfinch Funeral Home, Beach Chapel of Murrells Inlet at www.goldfinchfuneralhome.com.

Joseph &#8220;Joe&#8221; Fiorentino, most recently a resident of the Brightwater community, went to his heavenly home on Aug. 14, 2021. Joe passed away in the company of his sons, Steve and Rob, at the McLeod Hospital in Little River, SC, after... View Obituary & Service Information

The family of Joe Fiorentino created this Life Tributes page to make it easy to share your memories.

Joseph “Joe” Fiorentino, most recently a resident of the Brightwater...

Send flowers to the Fiorentino family.