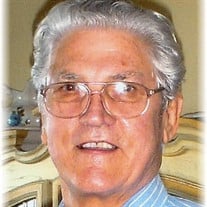 Conway..... Joe Dunsenberry Perry, 87, of Conway, SC passed away, Sunday, December 8, 2019 at his home. Joe was an outdoorsman and a forester. He worked for International Paper Company and then transitioned to building golf courses. He built golf courses throughout the United States and all over the world, including Hawaii, Japan, Bermuda, South America and Antigua. He was well known in the golf course industry for his detail to focus and quality of work. He built Arcadian Shores Golf Course in Myrtle Beach as well as the former Skyway/Waterway Hills Golf Club and eventually became the owner/operator. Joe was born in Socastee, Horry County, SC to the late Lenwood Leo "Bubba" Perry and Ivey Edna Smith Perry. In addition to his parents, he was preceded in death by his mother-in-law, Bertha Stalvey Mishoe; his father-in-law, Charles Edward Mishoe; his beloved wife of 62 years Mary Etta Mishoe Perry; his adored son, Charles Leo Perry; his son-in-law, Luther Whitlock; one sister; four brothers; one sister-in-law; three brothers-in-law; and four nephews and his loyal companion his poodle Gigi. Joe is survived by his beloved children; daughter, Suzanne Perry and her husband, Gene Dreibelbis of Conway, daughter, Joetta P. Whitlock of Conway; and son Andrew V. "Andy" Perry of St. Thomas U.S. Virgin Islands; his pride and joy, three beautiful granddaughters, Ivey and husband Jason Ridders of Conway, Islandia Perry of New York City, Jordan Perry of Myrtle Beach; and two beautiful great-granddaughters, Zoey and Sophie Ridders; as well as many nieces and nephews. Visitation will be held Wednesday, December 11, 2019, from 4:00 - 6:00 p.m. at Goldfinch Funeral Home, Conway Chapel. Funeral services will be 2:00 p.m. Thursday, December 12, 2019, at Goldfinch Funeral Home, Conway Chapel with Rev. Kirk Lawton officiating. Entombment will follow at Hillcrest Mausoleum. In lieu of flowers, donations may be made to the charity of your choice. Joe was a charitable and honorable man and was always giving to others. Goldfinch Funeral Home, Conway Chapel is serving the family.

Conway..... Joe Dunsenberry Perry, 87, of Conway, SC passed away, Sunday, December 8, 2019 at his home. Joe was an outdoorsman and a forester. He worked for International Paper Company and then transitioned to building golf courses. He built... View Obituary & Service Information

The family of Joe Dusenberry Perry created this Life Tributes page to make it easy to share your memories.

Send flowers to the Perry family.