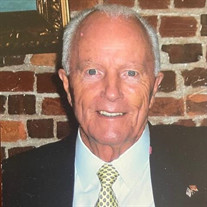 John Burwell Melvin, age 96, of Pawleys Island, South Carolina, died on June 1, 2021 after a brief illness. Mr. Melvin was a lifelong resident of Annapolis, MD, prior to moving to South Carolina in 1997. He was the son of the late Judge Ridgely P. Melvin of the Maryland Court of Appeals and the late Augusta B. Melvin. He attended elementary schools in Annapolis and attended Episcopal High School in Alexandria, Virginia. He joined the United States Marine Corps upon leaving high school and after boot camp training in Parris Island, SC, was transferred to Pre-College Training Course at Camp LeJeune, NC. Upon successful completion of that course, he was ordered to the Marine V-12 program at Princeton University for undergraduate study. In 1945, he was transferred to the Platoon Leaders School at Quantico, VA, and after intensive training, was commissioned a Second Lieutenant in the Marine Corps. He resigned his Regular Commission as Captain in 1954 and accepted a Reserve Commission, retiring with the rank of Colonel in 1976 with 33 years of credited service. During his years as a Marine Corps Regular Officer, he served in many interesting and varied positions. In 1945, he was the senior officer at Shangri-La, now known as Camp David. He was temporarily attached to the State Department in 1946 as a Diplomatic Courier, which took him to England, France and Canada. His other overseas duties were performed in China, Japan, Korea, Thailand, and Burma (now Myanmar). In 1953, he was part of a United Nations team composed of Americans, Chinese Nationalists, Burmese, and Thais, whose responsibilities involved the evacuation of Chinese Nationalist troops from Burma to Taiwan. His decorations include the Navy Cross (the Marine Corps’ highest decoration for extraordinary heroism), for his action as Company Commander in Korea in 1953. He was also awarded a Letter of Commendation with Combat “V”, the Purple Heart, and the Silver Star Order of Chung Mu, the latter being presented to him by the Korean Government for heroism in the defense of South Korea. For ten years, beginning in 1953, his picture in the Marine Corps formal dress blues uniform was used as a recruiting poster throughout the U.S. In 1956, he and his brother-in-law, the late Garnett Y. Clark, formed the Clark, Melvin Companies, which specialized in financial and retirement planning. Mr. Melvin was the president of the companies at the time of their sale in 1984. In addition to his involvement in the Clark, Melvin Companies, Mr. Melvin was President and Director, and later Chairman of the Board of the Coca-Cola Bottling Company of Annapolis, MD from 1967-1983. Mr. Melvin was the director of Farmers National Bancorp and its subsidiary, the Farmers National Bank, from 1965 to 1994, when Farmers National was acquired by First Virginia Banks of Falls Church, VA. He was then elected to the Board of Directors of First Virginia Banks, Inc. He served in the capacity until his retirement in 1999. He was a past vice president and treasurer of the Board of Managers of the Anne Arundel General Hospital, the predecessor of the Anne Arundel Medical Center. He was a past director of the Annapolis Chapter of the American Cancer Society and a past president of the Annapolitan Club. At the time of his death he was emeritus member of the South River Club and Naval Academy Golf Association. Mr. Melvin had a longstanding and participating interest in athletics, beginning with horseback riding when he was a child. He appeared in shows around Anne Arundel County, MD winning many blue ribbons. He was on the varsity football and baseball teams at Episcopal High School, as well as Princeton University. While serving in the Marine Corps, he was a member of the 1948 COMNAVWESPAC (Tsingtao, China) All-Star Baseball team, and he was a member of the 1949 San Diego Marine Corps Recruit Depot Football Team. He was an avid golfer and, in addition to courses in the United States, he played in Canada, the British Isles, Europe, Mexico, Australia, New Zealand, China, and Thailand. He was also an active member of the Litchfield Country Club in Pawleys Island, SC. He had four holes-in-one, three at the Naval Academy Golf Course and one at the Chartwell Country Club in Severna Park, MD. He was admired by all who knew him for his loyal friendship, courage, dignity, sense of humor and devotion to his beloved wife Jane and his children and grandchildren, his many friends and his country. He was married to the late Mary M. Melvin in 1946 and divorced in 1985. He remarried in 1987 and is survived by his loving wife, Jane Hazzard Melvin of Pawleys Island, SC; a son, John B. Melvin, Jr., and three daughters, Debra M. Farrell (Michael), Elizabeth P. Melvin, and Jennifer K. Melvin, all of Annapolis, MD; a stepdaughter, Della Ann B. Ellis (Charles), of Tucson, AR; five grandchildren and four step grandchildren. Two memorial services will be held, one at All Saints Church, Pawleys Island, SC on Saturday, June 5 at 1 pm and one at St. Anne’s Church, Annapolis, MD, at a later date followed by a reception at the Annapolitan Club. The family has asked that in lieu of flowers, donation be made to Tidelands Community Hospice in Georgetown, SC (www.tidelandshospice.org/pages/donate\) or Hospice of the Chesapeake in Annapolis, MD (www.hospicechesapeake.thankyou4caring.org).

John Burwell Melvin, age 96, of Pawleys Island, South Carolina, died on June 1, 2021 after a brief illness. Mr. Melvin was a lifelong resident of Annapolis, MD, prior to moving to South Carolina in 1997. He was the son of the late Judge Ridgely... View Obituary & Service Information

The family of John B. Melvin created this Life Tributes page to make it easy to share your memories.

Send flowers to the Melvin family.