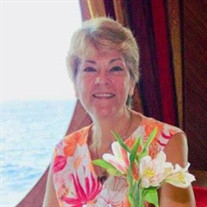 Myrtle Beach, SC…Karen “Kay” Brickell, age 75, passed away Tuesday, April 14, 2020. Karen (Kay) Brickell was born on August 30th, 1944 in Fayetteville, North Carolina, a daughter of the late William and Gertrude Chapman. Kay primarily grew up in Norfolk, Virginia and was a 1962 graduate of Matthew Fontaine Maury High School. During the mid-sixties, Kay and husband Charlie Brickell relocated to the Washington DC metro area to start their careers and raise a family. Over the next 40+ years, Kay held positions at the National Oceanic and Atmospheric Administration (NOAA) and Potomac Electric Power Company (Pepco), while also serving as a stay-at-home-mother. Kay was very committed to God and the church, spending many years as a member of both the First Baptist Church of Waldorf and Calvary Gospel Church, both in Waldorf, MD. As a committed Christian, Kay was very passionate about serving God and Jesus Christ in both church choirs, using her magnificent voice as a vehicle to reach and touch people’s hearts. One of Kay’s true passions and hobbies was to travel with Charlie. Kay visited all 50 states in the USA, with Alaska, Hawaii, and the American west states being some of her favorites. In addition, Kay visited Israel to visit the holy sites that were so meaningful to her as a Christian. In 2012, Kay and Charlie moved to Myrtle Beach, South Carolina to enjoy their retirement years. Kay continued to serve God at the Grand Strand Baptist Church in Myrtle Beach, where she also touched people with her voice and made many friends. Kay, Charlie, and their dog Smokey maintained their love for travel while in Myrtle Beach, taking their camper all over the United States to visit numerous historic landmarks and sites. Surviving are her husband of 58 years, Charlie Brickell, two sons, Chris Brickell (Sabine) of Ashburn, VA and Mark Brickell (Crystal) of Huntingtown, MD, three grandchildren, Amanda Brickell, Christopher Brickell and Jacob Brickell, two brothers, William “Bill” Chapman (Serene) of Myrtle Beach, SC and Lanny Chapman (Kathy) of Huntingtown, MD, and one sister, Phyllis Forbes (Clarence) of Myrtle Beach, SC. She was predeceased by her parents William and Gertrude Chapman, brother Donald Polston, sister Faye Bachelor, sister Inez Carpenter, sister Delores Futrell and sister Judi Belyea. Services will be held in Waldorf, MD. Please sign an online guestbook at www.goldfinchfuneralhome.com Goldfinch Funeral Home, Carolina Forest Chapel is in charge of local arrangements.

The family of Karen "Kay" Brickell created this Life Tributes page to make it easy to share your memories.

Send flowers to the Brickell family.