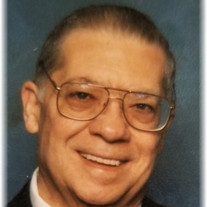 Conway…. Kenneth Ray Miller, age 81, of the Juniper Bay area, died the early afternoon of Thursday, May 28, 2020 at Embrace Hospice House, after a long illness. He was born at 1:30 p.m. in his parents' home at 338 N. Columbia Street in Salina, KS on January 10, 1939. He was the handsome son of Asa Warren and Doris Natalie Miller, however at the early age of only six weeks, he lost his earthly father, Asa, during a work accident. Ken had moved north to a small farming town of Delphos, KS to complete his last three years of elementary school and graduate from high school in a big class of 17 students. He enlisted in the Air Force in 1956, where he obtained his initial electronics knowledge, and spent a tour of duty in Kunsan, South Korea and Ft. Worth, TX. He left the military in 1960 to work for the ATandT Corporation on maintenance and telegraph equipment in Colorado, and microwave radio and underground cable in western Kansas. He married Elizabeth H. Small on January 7, 1967, and their son, Marc Miller, was born on October 8, 1967 in Garden City, KS. In 1970, he transferred to ATandT's Engineering Department at Kansas City, MO, where he had various cost and equipment engineering assignments, and was promoted to a supervisor. In 1978, Ken was promoted to a manager position and transferred to ATandT Network Engineering Headquarters at Bedminster, NJ. He worked 14 years in NJ on investment management of nationwide projects, capital budgets, deployment of computer equipment, and the breakup of the "ATandT Bell System." On January 17, 1984, his wife Elizabeth, passed away due to cancer. In 1989, he married Phronsie West of Conway, SC. In 1992, since Ken and Phronsie both preferred the "South," he transferred to ATandT HQ Engineering office in Atlanta, where he was responsible for the national deployment of computer equipment for network operations support systems. After about 37 years of service, he retired from ATandT in 1997, and in 1998 moved to his wife's hometown of Conway, SC. He was a member of the Oakey Swamp Baptist Church. He was predeceased by his parents, Asa and Doris Miller; two step-fathers, Wesley Wyble and Lornie Crusha; first wife Elizabeth H. Windham Small Miller; four half-brothers, Douglas Crusha, William Wyble, Jack Wyble, and David Wyble; a sister, Betty Hanchett; and stepson Eddie Small, Jr. Survivors include his loving wife of 30 years, Phronsie Miller; children Marc Miller of Middlesex, NJ; Westley Branton (Tina) of Conway, SC; Carol Cox of Myrtle Beach, SC; Tami Pena (Victor) of Santa Clarita, CA; Lizabeth Gritt (Pat) of Paola, KS; and Debra Sharts of Edgerton, KS; brother Michael Crusha (Lena) of Graford, TX; and many grandchildren. A graveside ceremony will be held Monday, June 1 at 2:00 p.m. at Hillcrest Cemetery with Pastor Darren Hardwick officiating. Goldfinch Funeral Home, Conway Chapel is serving the family.

The family of Kenneth R Miller created this Life Tributes page to make it easy to share your memories.