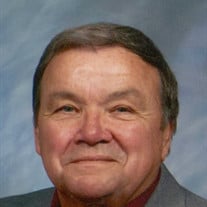 Larry Hayes Jones, Sr. passed away on Friday, January 15th 2021 at Grand Strand Medical Center. Larry was 81 years old. Larry was born in High Point, NC on May 21st 1939 to the late and loving parents Marvin Earsel Jones and Bessie Elizabeth Jones (Joyce). He was the 7th of 8 children. Larry married his loving wife Mary Ann (Crews) on June 30th 1956. Larry was in law enforcement for over 25 years with the Fairfax County Police Department and then served as the Chief of Police in Spencer, NC for 5 years. Larry and Mary Ann then retired and moved to Myrtle Beach, SC. Larry was a vibrant man whose smile and laughter lit up the room. He always had a joke to tell, a story to pass on, or just a kind word to share. Larry was a man with whom you wanted to spend time. Larry was a man of faith, spending many years as a local church Deacon; he had a love of old Westerns, a good bargain, and his greatest accomplishment; his loving family and friends. Larry's time with loved ones was precious to him and he was never happier than when his home was full of family, friends and laughter. He especially treasured time with family at Barefoot Landing Campground and at Myrtle Beach. Larry was preceded in death by his son Larry Hayes Jones, Jr. Larry is survived by his loving wife of 65 years Mary Anne Jones; son Darrell Jones; grandson Larry (Diane) Hayes Jones III; granddaughters Jessica (Wayne) Lambert, Amber (Kevin) Dise, Angela Jones, Lauren Jones, Taylor Jones, Sarah Bunker and Michelle Jones; and great grandchildren Jason Nugent, Kyle Dise, Daniel Unciano, Ryan Lambert, Larry Jones IV and Mary Ann Jones, Cecily (Charles) Heath, David Adcock, Dustin Adcock, Cash Heim, Sadie and Sam Bunker; and many other loving family members. Visitation will take place for Larry on Friday, January 22nd, 2021 from 6pm to 8pm at Goldfinch Funeral Home of Conway. A funeral service will be held on Saturday, January 23rd, 2021 at 11am at Tilly Swamp Baptist Church. Burial will follow funeral services at Tilly Swamp Baptist Church.

The family of Larry H. Jones Sr. created this Life Tributes page to make it easy to share your memories.

Send flowers to the Jones family.