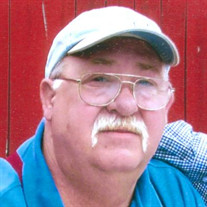 Loving father, husband and brother, Larry Craven Stephens passed away August 11, 2020 after a period of declining health. Larry was born in Charlotte, NC, and was the devoted son of Clyde and Edna Stephens. Larry graduated from North Mecklenburg High School in 1966 and subsequently joined the US Army, training as a helicopter mechanic and eventually deploying to Vietnam. Upon his return, he married Mary Diane Rockecharlie, and shared her life for the next 50 years. Larry started a career at Charlotte Steel Drum, eventually rising to become President of the company. Not only a fine manager and businessman, he was also a consummate craftsman who enjoyed working with his hands. He was a competent carpenter and electrician, as well as a skilled mechanic who enjoyed building and racing his own dragsters. Unfortunately, he loathed computers, which is ironic considering the field in which his son entered. Larry is survived by his adored children, Amanda and Jonathan, both of whom he loved beyond measure; his beloved wife, Diane; his sisters and brothers-in-law Nancy Stacy, Marilyn and Dick Lyles, and Christine and Jimmy Austin; and his brothers and sister-in-law, Jimmie Steele and Tommy and Susan Ulrich. Larry also leaves behind his in-laws Barbara and Alain Lacouture, Kelly Rockecharlie, Kate and Will Jenkins, Ned and Karen Rockecharlie, Phillip and Willow Rockecharlie, and John and Ann Marie Rockecharlie, as well as his nieces, nephews, extended family and friends. The family would like to extend thanks to the staff of Tidelands Waccamaw Community Hospital for the care they provided in Larry’s final hours. At Larry’s request, there will be no service or funeral. In lieu of flowers, loved ones are encouraged to donate in Larry’s honor to the Wounded Warrior Project, P. O. Box 758516, Topeka, Kansas 66675-8516, and at the family’s request to raise a glass in memory of a wonderful, loving, and dearly missed man. Arrangements are in the care of Goldfinch Funeral Services; online at goldfinchfuneralhome.com.

Loving father, husband and brother, Larry Craven Stephens passed away August 11, 2020 after a period of declining health. Larry was born in Charlotte, NC, and was the devoted son of Clyde and Edna Stephens. Larry graduated from North Mecklenburg... View Obituary & Service Information

The family of Larry C Stephens created this Life Tributes page to make it easy to share your memories.

Send flowers to the Stephens family.