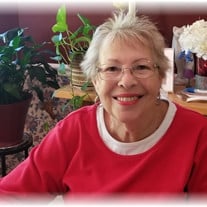 Conway…….. In Loving Memory of Laurel A. Dodd Laurel A. Dodd (nee Oliver), age 89, of Conway, South Carolina, passed away in the early morning hours of July 15, 2020, from breast cancer. She was born January 4, 1931, in Perth Amboy, New Jersey, to Charles and Rebecca Oliver. She was married to George Thomas Dodd in 1955, who preceded her in death in 2003. After marrying George, they spent their early married years in Los Angeles, California, and started their family. They moved back to the east coast to Queens, New York, and then to Long Island, New York. They settled in Bethpage, NY, where they added to and raised their family. They relocated to Conway, South Carolina, upon George's retirement in the early 1990s. Laurel was the glue that kept the family together. She was a strong, kind, and compassionate woman and mother. She was a second mother to many of the Dodd children's friends and was affectionately known as Momma Dodd. To her family, she had the unique and special nickname of "Woo." Laurel is survived by her sister, Claudette Gilchrist, and her husband, Charles, her sister-in law, Dorothy Ehmsen, and her brother-in-law, Donald Dodd; her children Georgette "Gigi" Kossmann and her husband, Edward, Michael Dodd, Leslie Dodd, Kimberly Flynn and her husband, Matthew, and Keith Dodd and his wife, Lisa; grandchildren Michael Vincent Dodd, Nicole Dodd, and Thomas Walters; great-grandchildren Violeta Dodd and Michael Thomas Dodd, and many cherished nieces and nephews. Laurel was predeceased by her sister, Marilyn Esposito, in 2014, and her daughter, Catherine Dodd, in 2011. A Funeral Service will be held at Goldfinch Funeral Home Conway Chapel. Due to the COVIS-19 pandemic the service is closed and by invitation only. Goldfinch Funeral Home, Conway Chapel, is assisting the family with arrangements.

The family of Laurel Armida Dodd created this Life Tributes page to make it easy to share your memories.

In Loving Memory of Laurel A. Dodd

Send flowers to the Dodd family.