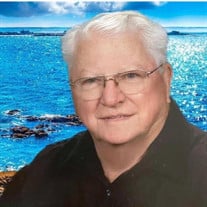 Lloyd "Bugs" Seggie went to be with his Lord and Savior at the age of 88 on Tuesday, April 12, 2022 at his home. He was born in Midlothian, Maryland on November 4, 1933. He was predeceased by his childhood sweetheart and wife of 68 years, Wilma Jean (Hoban); his parents, Jesse and Hannah Taylor; his biological parents, Charles & Pearl Seggie; his brothers Charles and Harry Seggie; his sisters, Mary Leptic, Sarah Loar, Shirley Harmon and Donna (Deanie) Cutter. Lloyd enlisted in the Air Force in 1954 and retired as MSgt in 1977. He was stationed around the United States and Europe and served in the Vietnam War from 1968-1969. After his time in the military, he worked for GTE/Verizon as a switchman in Myrtle Beach, South Carolina for 30 years before retirement. After retirement, he enjoyed many cruises and vacations to Hawaii. One of Lloyd’s favorite activities was shooting archery.. He won many national and international tournaments including the European Field Archery Championship, the American Forces Europe Indoor Bare Bow Championship, and the South Carolina State Indoor Bare Bow Championship. He was a founding member of the Myrtle Beach Air Force Base Archery Club. Lloyd’s other hobbies included hunting, fishing, shooting, bowling, and baseball. He was a rifle marksman and often hunted squirrels, rabbits, and deer. He loved working on electronics such as TVs, radios, and computers. He was a championship horseshoe player and a black belt in Judo. Lloyd is survived by his daughters Joleen and her husband Rick of Myrtle Beach, Jolinda Smith and her husband Clay of Durham, NC and Amy Herrera and her husband Oscar of Myrtle Beach; grandchildren Jason Smith, Chuck Tinsley, Aaron Smith, Amanda Tinsley, Jesse Herrera, Kristen Herrera, and Nicole Herrera; great granddaughter Emerald Smith; and many nieces and nephews. A special thank you to his part time caregiver Cathy Wright-Mc Cray of Homewatch Caregivers, Hospice aide Tiffany, and many others with Homestead Hospice. He was a member of Socastee Baptist church for 48 years. A memorial service will be held at Socastee Baptist Church, Myrtle Beach, SC on Saturday, April 23rd at 2 PM with visitation one hour prior. Memorials may be made to the church, 3690 Socastee Blvd. Myrtle Beach, SC 29588. The service will be available for livestream at facebook.comSBCMyrtleBeach.com.

Lloyd "Bugs" Seggie went to be with his Lord and Savior at the age of 88 on Tuesday, April 12, 2022 at his home. He was born in Midlothian, Maryland on November 4, 1933. He was predeceased by his childhood sweetheart and wife of 68 years,... View Obituary & Service Information

The family of Lloyd "Bugs" Seggie created this Life Tributes page to make it easy to share your memories.

Lloyd &quot;Bugs&quot; Seggie went to be with his Lord and Savior at the...

Send flowers to the Seggie family.