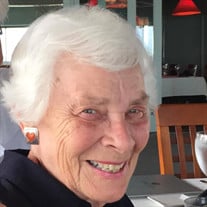 Marjorie Oxendine Kelly Rinehart was a lover, and over the course of her 93 years, she generously gave her love as a wife, mother, Nana and great-Nana. Born on May 26, 1928 in Wilmington, Del., and raised there, Marge married her high school sweetheart, John Kelly, in 1948. They moved to Endwell, N.Y., where Marge spent much of their early marriage involved with ACHIEVE, an organization that advocates for an enhanced quality of life for persons with intellectual, developmental and other disabilities. She was delighted to be a pioneer in this organization, which proved to be critical in guiding her and John while raising their firstborn, Susan, who had Down syndrome. Their son, Michael, was born less than a year later, a close-in-age sibling for Susie to watch, learn from, and love. Daughters Camille and Robin arrived five and seven years later, rounding out the Kelly clan of six. Family always came first. Marge and John frequently visited their hometown to be with parents, in-laws, sisters, nieces and nephews. In those early years, Kelly vacations often took place on the shores of Delaware, with extended family all around. When not immersed in family, Marge enjoyed several activities in the Endwell area. She held a part-time job in the local school system, played bridge and tennis, rode her bike for fun, and was a loyal garden club member. In 1989, she and John retired to Pawleys Island, S.C., where they found new friends and appreciated living close to their daughter and son-in-law, Robin and Joe Rossi, and their granddaughters, Justine and Heather. In her new home, in addition to helping nurture her grandkids, Marge joined a competitive tennis team and continued to garden and care for nature. Sadly, however, a year after their move south, cancer took John, robbing Marge of her first love. In 1994, she married Wade Rinehart, a man she met at a local church, where both sang in the choir. Wade loved every fiber of Marge’s being, a fact made obvious by the attention and tenderness he gave her every day. In Wade, Marge saw a true Southern gentleman -- kind, honest and sweet – who exuded so many of the fine qualities she found in her first husband. Together, Marge and Wade enjoyed tennis, walks on the beach, vacations in the mountains, and time spent with both their families. They had a large circle of friends – the closest being their tennis club and dinner club buddies – who provided a continuous thread of fun, relaxation and enjoyment. In her retirement years, Marge was blessed with more family to love. After her triplet grandbabies, Tony, Lauren and John Natale, were born in 1995, she and Wade frequently traveled the 14 hours to New York to be with them and their parents, Camille and Vincent Natale. Marge was the most devoted Nana. Whether her grandchildren lived at a distance or nearby, she made every effort possible to attend their special events, birthdays and graduations. In her day-to-day life, Marge was an excellent chef, creating delicious dishes for her family and setting a beautiful dinner table for all. She was an immaculate dresser, well put-together with coordinating jewelry and accessories, and she always smelled of sweet perfume. Although she was physically a tiny lady, she exuded the warmth, smile, friendliness and personality of a giant. The best was when Marge would get laughing so hard -- usually at herself -- that she would cry and struggle to get it together! She was a such a source of pure joy to be with, no matter the circumstances. An extraordinary woman living an ordinary life, Marge passed away peacefully on June 2, 2021, with family by her side. She was a gift to those who knew and loved her and leaves a legacy of gratitude and memories to fill her family’s hearts. She was preceded in death by her first husband, John Kelly, daughters Susan Kelly and Robin Rossi, and son Michael Kelly. She is survived by her husband, Wade Rinehart; daughter and son-in-law, Camille and Vincent Natale; son-in-law Joe Rossi; grandchildren Justine (Bryant) Macklin, Heather Rossi, Tony Natale, Lauren Natale, and John Natale, as well as great-grandchildren, Melania, Aniston and Carter. A small service will be held at 11 a.m. on Saturday, June 19, 2021 at St. Paul’s Waccamaw United Methodist Church in Pawleys Island. Anyone wishing to honor Marge’s memory should please consider donating to the church, located at 180 St. Paul Place, Pawleys Island, SC 29585; or to ACHIEVE, 4733 Vestal Parkway E., Vestal, NY 13850; or to a charity of choice.

Marjorie Oxendine Kelly Rinehart was a lover, and over the course of her 93 years, she generously gave her love as a wife, mother, Nana and great-Nana. Born on May 26, 1928 in Wilmington, Del., and raised there, Marge married her high school... View Obituary & Service Information

The family of Marjorie O Kelly created this Life Tributes page to make it easy to share your memories.

Marjorie Oxendine Kelly Rinehart was a lover, and over the course...

Send flowers to the Kelly family.