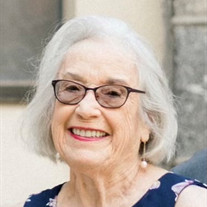 Conway, SC.....Marlyn Frances Reaman, daughter of James Allen and Vannie Griffin Stubbs, died on July 14, 2021 at the age of 86. She is survived by William Clair Reaman, her husband of 52 years, and her son, Reginald Allen Blackburn and his wife, Amy and two grandchildren, Charles and Katherine. She was preceded in death by her daughter, Dorothy Kim Blackburn King as well as her two sisters, Louise and Anne. Frances was born in Norfolk, Virginia in 1935 and received a Bachelor's degree from Temple University. She was a devoted wife, sister, mother and grandmother. In her professional career she worked for the United States Navy at the Naval Inventory Control Point in Philadelphia, Pennsylvania and retired after 25 years of honorable service. Throughout her life Frances was an active community volunteer. She enjoyed serving as a docent for the Philadelphia Zoo for 20 years and was active in the Bucks County Area Agency on Aging. Everywhere she lived, Frances was a dedicated member of the Methodist Church. Over the years, she served in many roles including mission and community outreach and as a lay delegate to the Annual Methodist Conference. Frances was an adventurous traveler visiting Israel, Egypt, two mission trips to India and a memorable journey to Madagascar with the Duke University Lemur Research Center. The funeral will be at 11:00 AM Friday, July 23rd at First United Methodist Church at 1001 Fifth Avenue, Conway, South Carolina 29526. In lieu of flowers, the family asks that donations be made to First United Methodist Church of Conway. Memorials may be sent to First United Methodist Church: or Text 732556 to "firstconway Reaman" or First United Methodist Church, 1001 Fifth Avenue, Conway, SC 29526 Sign an online guestbook at www.goldfinchfuneralhome.com Goldfinch Funeral Home, Conway Chapel is in charge of arrangements.

Conway, SC.....Marlyn Frances Reaman, daughter of James Allen and Vannie Griffin Stubbs, died on July 14, 2021 at the age of 86. She is survived by William Clair Reaman, her husband of 52 years, and her son, Reginald Allen Blackburn and his... View Obituary & Service Information

The family of Marlyn Frances Reaman created this Life Tributes page to make it easy to share your memories.

Send flowers to the Reaman family.