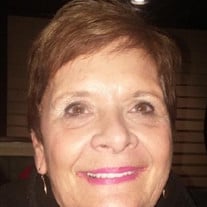 Marsha Louise (Dunn) Anderson, age 72 of Conway, South Carolina, passed away on Tuesday, November 30, 2021. Marsha was born in Fitchburg, Massachusetts on October 19, 1949, to the late Guilford M. Dunn and Bernadette Eva (Pinard) Dunn. She was a graduate of Lunenburg High School in Lunenburg, Massachusetts. She married Kenneth (Ken) A. Anderson of Ashburnham, Massachusetts on March 15, 1969. Ken and Marsha celebrated 41 years of marriage before his death in 2010. Ken served in the United States Air Force for 27 years. Throughout his years of service, Marsha and Ken resided in many different states across the country. Upon his retirement from the military, they retired in Conway, South Carolina. Marsha worked at Sears, Roebuck, and Company. After her employment with Sears, she worked at the McCutcheon, McCutcheon, Baxter Law Firm in Conway, South Carolina. When Marsha left the McCutcheon, McCutcheon, Baxter Law Firm, she joined the law offices of Thompson and Henry Law Firm until she retired in 2012. Marsha moved to Brandon, Mississippi in October of 2017 to be closer to her son, Kenneth, and granddaughter, Spencer. Marsha was a loving and caring person to all she knew. She was a devoted wife, mother, grandmother, sister, and friend. She leaves a void in the lives of many. Her legacy will live on in the hearts and minds of her loved ones. She is preceded in death by her parents and husband, Kenneth A. Anderson. Marsha is survived by her children, Tracy J. Price of Romeoville, IL, Kenneth R. Anderson and wife, Ashley, of Brandon, MS, and Norrie L. Hamby and husband, Max, of Berlin, MD; brothers, Gil Dunn and wife, Pam, of Winston Salem, NC and Gary Dunn of Lunenburg, MA; grandchildren, Kiley Hamby, Kennedy Hamby, Kayden Hamby, and Spencer Anderson; a host of other relatives and friends who will miss her quick wit and beautiful smile. A visitation will be held on Tuesday, December 28, 2021 from 12:00- 1:30 p.m. at the Goldfinch Funeral Home located at 606 Beaty Street in Conway, South Carolina before placing her in her final resting place alongside her husband in Hillcrest Cemetery, Conway, SC. In lieu of flowers, memorial donations may be to the American Cancer Society, 950 48th Avenue, Myrtle Beach, South Carolina, 29577. You may share condolences at and sign the guestbook at www.goldfinchfuneralhome.com

The family of Marsha Louise Anderson created this Life Tributes page to make it easy to share your memories.

Send flowers to the Anderson family.