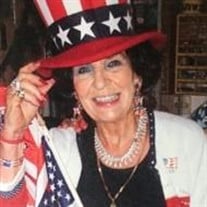 Martha Lee “Leigh” Ingram Vandever was born to Gladys (Horine) and Dr. John S. Ingram, in Cassville, Missouri, on July 21, 1930. She passed away October 1, 2020, at The Lakes at Litchfield Senior Living Community, Pawleys Island, South Carolina. She attended Cassville High School, graduating a year early to accompany her older sister, Mary Louise, to the University of Arkansas, where Leigh was crowned homecoming queen her freshman year (yes, at 16 years old!). When her family relocated to Tulsa, Oklahoma, she transferred to the University of Tulsa, garnering a degree in business administration in 1951. Leigh was socially active during her college years and in her adopted home of Tulsa. She had many friends from her sorority days as a Kappa Kappa Gamma and early activities with the Tulsa Junior League. Leigh lived LARGE. She was a devout and active follower of the Victory Christian Church of Tulsa. Her passions were for clothes, jewelry and holiday decorations. Leigh found that selling residential real estate was her calling. She LOVED it. Her career began in 1969 with Sheldon Detrick’s firm, Detrick Realtors. Leigh sold a house her first day on the job! She went on to become a local LEGEND in real estate. In 1993, she had achieved sales in excess of $80 million. In 2010, the National Association of Realtors feted her for her 40 plus year career with the honor of Realtor Emeritus. Leigh continued to reside in Tulsa until early 2020. Leigh was preceded in death by her parents, her sister Mary Louise Pryor, her brother Jack Ingram, her brother-in-law William Pryor Jr., and her daughter-in-law Beth Strommen. Leigh is survived by her two children who were the light of her life, John (Roberta) C. Martin III of Pawleys Island, South Carolina, and Margaret B Martin of Annapolis, Maryland. She also survived by her brother, Dr. J. Robert Ingram, of Tulsa, Oklahoma, grandchildren John C. (Brittany) Martin IV and Preston Martin of Hollywood, Maryland, and Taylor Martin (Joe) Spofford of Alexandria, VA , nieces and nephews Leigh Ingram of Tulsa, Oklahoma, Louise Pryor (Scott) Campbell of Atlanta, Georgia, Lauren Pryor (William) Zilk of Little Rock, Arkansas, and William (Ellen) Pryor III of Dallas, Texas. Due to COVID-19 concerns, private services at Oak Hill Cemetery in Cassville, MO have been postponed until the Spring 2021.

The family of Martha Lee Vandever created this Life Tributes page to make it easy to share your memories.

Send flowers to the Vandever family.