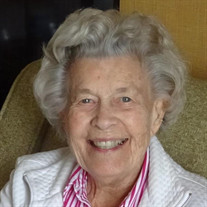 Mary Ann Compton Teetor, one of God’s best people, died April 3 at her home in Pawleys Island. She was born in Indianapolis, Indiana, on October 28, 1928, to Clara Ruth (Meid) and Charles William Compton. The family lived at varying times in Indianapolis and Carmel, Indiana. Mary Ann attended the Carmel and Indianapolis public schools, graduating from Shortridge High School in 1946. With both of Mary Ann’s older brothers in the army in Pacific WW2 combat, her mother needed a full-time job. Although a full-time high school student, Mary Ann took over the housekeeping and cooking duties for the family until her brothers returned safely. However, she refused to let that interfere with her social life. As soon as the evening dishes were done, she was on her bike enroute to a friend’s house. Mary Ann loved people and claimed to know each of her 400+ Shortridge classmates personally. She then attended Indiana University (Bloomington), graduating with a Bachelor of Science in Home Economics Education in 1950. During her college years she met her future husband, Tom, and they were married June 24, 1950. Their life of mutual devotion could only be wished for by most people. Tom was employed in Cincinnati, and that is where they lived and had the first two of their four daughters. They moved back to Indiana in 1955 when Tom got a job in Fort Wayne, where their last two daughters were born. After five years in Cincinnati, where she knew few people, Fort Wayne was a gust of fresh air. It had not only an uncle and his family but a score of college friends who eagerly accepted her as one of their own. She was determined to get into community activities and do “her part” as a good citizen. She joined the Junior League and helped organize and perform with their puppetry group. They achieved national prominence within the League for the original educational productions they created and performed for the Fort Wayne public elementary schools. Her group was sent to represent Junior League at the national convention of puppeteers in Monterey, California. During her youth she was a member of the Methodist Church, but a few years after moving to Fort Wayne, she joined and was an active member of Plymouth Congregational Church. She was also a member of Psi Iota Xi service sorority and worked at the Christmas Bureau for many years. Although she never sought office and preferred to be just one of the workers, she was elected president of the Women’s Committee for the Philharmonic (now the Fort Wayne Philharmonic Foundation). Tom was an engineer and not really interested in people, but she dragged him into politics and public service, serving as his vice-committeeman (and doing 90% of the work) of the Allen County Republican Party for 25 years. She served as co-chairman of a U.S. congressional campaign and declined an offer to be County Vice-chair. With all of this activity, she never shirked her first priority jobs of wife, mother and homemaker. She was active in PTA and a serious taskmistress to her four girls when it came to both schoolwork and learning how to do more than boil water. Again, Mary Ann never ignored her social life. She was a member of Kappa Alpha Theta, Duodecimo research club, The Saturday Club (that met on Monday), Child Study (an arcane groups of wives who deigned to disclose the real subject material) and two bridge clubs. She loved bridge and was an active player until the games were stopped in 2020 by the China Virus. Her sense of humor was legend and many a brewing argument was stopped by some hilarious remark by her. The widow of one of Tom’s co-workers said that her husband had called Mary Ann “the funniest lady in town.” Mary Ann was up to every challenge, which she faced with courage and humor. When Tom learned to fly, bought an airplane and was flying all over the country on business, she flew with him when appropriate and took the AOPA “Pinch Hitter” course at Ohio State University where she learned how to land should the pilot become incapacitated. Hoping to wean Tom from flying, she suggested they take the Coast Guard Power Squadron course and charter a boat some vacation (“I can swim; I can’t fly.” It didn’t work; they got a boat too). Recently someone asked Mary Ann if she enjoyed those trips in the airplane. She replied, “I would have enjoyed it a lot more if I had known I would live through it.” After the girls were grown, schooled and married, Mary Ann and Tom were “snowbirds” and called Fort Myers, Florida home for a few years before health issues caused them to move to Pawleys Island, SC, where their youngest daughter and her husband lived. Tom had started his own consulting business in 1978, and as the final chapter of a slow retirement, they moved into The Lakes at Litchfield in 2011. Although she had mixed emotions about boats and airplanes, she loved life, her family, her friends and her country. She was a patriot. Mary Ann was pre-deceased by her parents, brothers Charles W. (Bill) Compton, David Meid (Meid) Compton and sisters-in-law Kathryn C. Compton and Constance T. Rodie. She is survived by her adoring and ever grateful husband, Thomas S. (Tom) Teetor and daughters Elizabeth T. Sherman, Barbara T. Waite (Erin), Catherine T. Miles (Mark) and Ruth T. Filchak (Tom). She is also survived by nine grandchildren and fourteen great-grandchildren. They are all patriots. If desired, memorials should be made to your favorite charity. Any service(s) will be announced soon and interment will be in Indiana at a later date.

Mary Ann Compton Teetor, one of God&#8217;s best people, died April 3 at her home in Pawleys Island. She was born in Indianapolis, Indiana, on October 28, 1928, to Clara Ruth (Meid) and Charles William Compton. The family lived at varying times... View Obituary & Service Information

The family of Mary Ann Compton Teetor created this Life Tributes page to make it easy to share your memories.