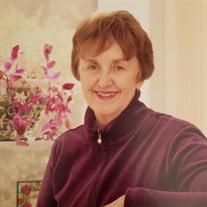 Mary E. Miller, 84, of Surfside Beach, passed away on January 24, 2021. She was born to the late Charles and Clara Cochrun, July 14, 1936 in Champaign Illinois. She married the love of her life Raymond E. Miller Sr. in 1954 and were married until his death in 1990. Mary is survived by three children: Lynn Miller, Julie Clanton and Raymond Miller. She is also survived by two grandchildren: Kim and Raymond Miller. Mary was an accomplished writer and wrote for various newspapers and magazines during her career including the position of Vice President and Operations Manager of Resort Publications, Myrtle Beach SC. She published her first book Baroness of Hobcaw The Life of Belle W. Baruch in 2006. This book is now being turned into a screenplay. Following the death of her husband she was invited to act as a resource person for the RCIA process, facilitating classes on prayers at St. Michael’s Catholic church. A few months later, she was offered the Director of Education position at this church. Following a pilgrimage to Fatima she found that she was called to develop a deeper relationship and a new direction with God. Mary received a M.A. in Pastoral Studies with a focus in Spiritual Direction in 1999 from Washington Theological Union, Washington, D.C. She then spent a year working with the spiritual director at Loyola House at the Guelph Centre of Spirituality in Ontario. She returned to SC and began providing individual spiritual direction and facilitated and directed centering prayer retreats. In an article about Mary published in the March 2008 issue of Coastal Business Life she stated “The greatest satisfaction for me is helping people come to the realization that God truly loves them just as they are…You see such a beautiful, beautiful interior change with the realization that they’re loved unconditionally. That makes it so much easier for them to turn around and love them unconditionally.” In 2014 she earned a Doctor of Ministry from Washington Theological Union, Washington, D.C. When her husband died, she shared with her children something she had read in September by Rosamunde Pilcher that I would like to share with you. It reflects the way Mary thought. “Death is nothing at all. It does not count. I have only slipped away into the next room. Nothing has happened. Everything remains exactly as it was. I am I, and you are you, and the old life we lived so fondly together is untouched, unchanged. Whatever we were to each other, that we are still. Call me by the old familiar name. Speak of me in the easy way which you always used. Put no difference in your tone. Wear no forced air of solemnity or sorrow. Laugh as we have always laughed at the little jokes we enjoyed together. Play, smile, think of me, pray for me. Let my name be ever the household word that it always was. Let it be spoken without an effort, without the ghost of a shadow upon it. Life means all that it ever meant. It is the same as it ever was. There is an absolute and unbroken continuity. What is this death but a negligible accident? Why should I be out of mind because I am out of sight? I am but waiting for you for an interval, somewhere very near, just around the corner. All is well.” . Mary will be cremated, and her ashes will be placed with her husband at Hillcrest cemetery in Conway SC. A Memorial Mass will be held on, Saturday September 11, 2021 at 10:00 AM at St. Michael’s Catholic church.

Mary E. Miller, 84, of Surfside Beach, passed away on January 24, 2021. She was born to the late Charles and Clara Cochrun, July 14, 1936 in Champaign Illinois. She married the love of her life Raymond E. Miller Sr. in 1954 and were married... View Obituary & Service Information

The family of Mary E Miller created this Life Tributes page to make it easy to share your memories.

Mary E. Miller, 84, of Surfside Beach, passed away on January...