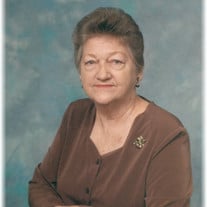 Conway, SC&#8230; Mary Frances Moose Schaneman, age 83, passed away Saturday, May 30, 2020. Mrs. Schaneman was born in Statesville, NC a daughter of the late Walter Eugene Moose and the late Vera Stewart Moose. She was predeceased by a daughter,... View Obituary & Service Information

The family of Mary Frances Moose Schaneman created this Life Tributes page to make it easy to share your memories.

Send flowers to the Schaneman family.