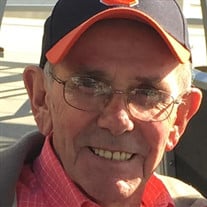 It is with great sadness that the family of Melvin Clifford Mounts announces his passing after battling a long-term illness, on Saturday, March 28, 2020, at the age of 78 years, at his home in Murrells Inlet, South Carolina. Born on May 13, 1941 in Washington, Pennsylvania to Clifford Melvin and Wilma Mounts, Mel was a 1959 graduate of Trinity High School and a 1963 graduate of Franklin & Marshall College (Lancaster, PA), where he excelled both academically and on the varsity wrestling squad. He was a proud brother of the Phi Psi fraternity. Beginning in 1963, and continuing for over seventeen years, Mel rose through the academic and administrative ranks of Syracuse University – culminating in the position of Vice-President of Student Affairs. Among his many duties was oversight of the SU Athletic Department. During this period, he navigated the tumultuous student-faculty reaction to the Vietnam War, spearheaded the controversial rebranding of the university mascot, and oversaw the development and construction of the Carrier Dome. Following his time at SU, Mel spent over twenty years as VP of Human Resources for Crown Uniform & Linen Service in Fall River, MA and Nashua, NH. These years were dedicated to improving relations between labor and management, supporting the overall wellbeing of the workforce, and developing best practices for all Crown operations. Mel was an avid golfer, swimmer and tennis player and rarely started a day without completing at least one crossword puzzle. He loved athletics, was a lifelong fan of all three professional Pittsburgh sports franchises and was passionate about the Syracuse basketball program. In addition, Mel spent over a decade working on the board of the Northern Ballet Theatre, and assisting in the annual performance of The Nutcracker. A pragmatist to the end, he always enjoyed finding solutions to everyday problems he encountered in work and life. He will be lovingly remembered by his wife, Patti Lavoie; his children, Hillery (John) McNeill, Suzanne Morrissey, and Brian Mounts, from his first marriage to Johnna Tonkin (nee Reynolds); and his stepdaughter, Michelle Lavoie. Mel will also be fondly remembered by his six grandchildren, John Hugh McNeill III (Jack), Madelaine Morrissey (Maddy), Annie McNeill, Jacob Pribilsky, Meghan & Dylan Mounts; three step-grandchildren, Jordan, Kayleigh & Michael; and by his sister, Marlene (Robert) Finch and her children. A memorial service in remembrance of Mel has not been scheduled at this time. In lieu of flowers, the family requests that donations be made in memory of Mel Mounts to the ‘Cuse Athletics Opportunity Fund. Donations may be sent to Syracuse University, 640 Skytop Road, 2nd Floor, Syracuse, NY 13244. Online donations can be made at givetosu.syr.edu.

It is with great sadness that the family of Melvin Clifford Mounts announces his passing after battling a long-term illness, on Saturday, March 28, 2020, at the age of 78 years, at his home in Murrells Inlet, South Carolina. Born on May 13,... View Obituary & Service Information

The family of Melvin Clifford Mounts created this Life Tributes page to make it easy to share your memories.

It is with great sadness that the family of Melvin Clifford Mounts...

Send flowers to the Mounts family.