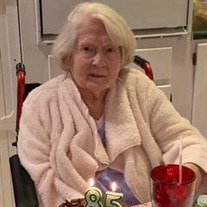 Conway, SC....... Myrnia Kay Strickland Ammons, age 85 passed away peacefully at her home Tuesday, July 13, 2021. She was born May 31,1936 in Marion County and was the daughter of the late Sam Craven and Florence Bell Gerrald Strickland of Pleasant View, SC. Myrnia is preceded in death by her beloved husband Hayward Ammons, Sr. Married to her childhood sweetheart, the couple relocated their young family to Myrtle Beach in 1959 for Hayward's job at the Sun News and Field and Herald newspapers. While raising three children, Myrnia was able to express her creativity and talents with sewing, cooking, ceramics and gardening. In addition to homemaking skills, she attended and graduated from Joyland Beauty School as a cosmetologist. And to be near her three children, she operated a beauty shop at her home. With an enterprising spirit, Myrnia was committed to perseverance and hard work by partnering with Hayward in 1964 to establish Horry Printers in Conway, SC. After his untimely death in 1999, she continued to operate the oldest printing company in Horry County until the very last day in her office on March 13, 2020. In addition to her family and work, Myrnia was involved with the Omar Shrine, Waccamaw Shrine Club and served as a past president of the Peddlettes. She was also an active member of Moose Lodge 1959 before Hayward's passing. As a young girl, she played the piano during church services at Pleasant View Baptist Church. Later both Myrnia and Hayward were founding charter members for Ocean View Baptist Church in Myrtle Beach, SC. She is survived by her daughter, Kim Lovin (Roger) and two sons Stan Ammons (Linda) of Conway and Woody Ammons (Donna) along with two granddaughters Haley and Bella Ammons of Myrtle Beach. Myrnia will be laid to rest Thursday, July 15, 2021 at Hillcrest Mausoleum during a private service. In lieu of flowers, contributions can be made to Heartland Hospice of Myrtle Beach, 2050 Corporate Centre Dr., Unit 220, Myrtle Beach, SC 29577 and Meals on Wheels of the Grand Strand, 4006 Postal Way, Myrtle Beach, SC 29579. Sign an online guestbook at www.goldfinchfuneralhome.com Goldfinch Funeral Home, Conway Chapel is in charge of arrangements.

Conway, SC....... Myrnia Kay Strickland Ammons, age 85 passed away peacefully at her home Tuesday, July 13, 2021. She was born May 31,1936 in Marion County and was the daughter of the late Sam Craven and Florence Bell Gerrald Strickland... View Obituary & Service Information

The family of Myrnia Ammons created this Life Tributes page to make it easy to share your memories.

Send flowers to the Ammons family.