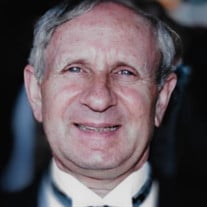 Norbert has led an interesting, exciting and fulfilling life. Born in Breslau, Germany at the time the Nazis came to power, he fled Germany with his family to Shanghai, China in 1939. Arriving into a totally alien environment and with limited funds, Norbert and his family spent eight years living in a ghetto in one room with forty other refugees. Norbert was fortunate to go to a school in Shanghai which taught in English. Before leaving China in 1947, Norbert had his Bar Mitzvah in Shanghai. The family emigrated from Shanghai to Montevideo, Uruguay traveling via the US. In Montevideo at age 13, Norbert started his auto mechanic apprenticeship. He worked numerous jobs in Uruguay and in 1958 immigrated to the United States. Six months after his arrival in the U.S., Norbert was drafted into the US Army. He served honorably for three years. While stationed in Germany, Norbert married a German girl with whom he fathered two children. It was notable that during the inductive process, the Army awarded Norbert a GED high school equivalent, which later allowed him to go to college, part time, for fourteen years. He graduated from George Mason University with a business degree. Norbert had a fulfilling career of 33 years with Federal Aviation Administration, rising through the ranks into a management position. Norbert remarried in 1990 to his sweetheart Sue. Together, they retired in 2001 from the Federal Government and have since lived a happy life that included much travel. Norbert is survived by his loving wife, Sue, his two children Susan and Mark, five step children and nine grandchildren. Throughout his life Norbert was an active gymnast, tennis player, skier, golfer and bridge player. He enjoyed building and repairing items in his home and helping friends and neighbors. He was an active member of Temple Shalom and enjoyed bringing his famous deviled eggs to the various functions. Norbert will be laid to rest at Arlington National Cemetery and will be missed by his family and friends. Donations can be made in Norbert's memory to Temple Shalom at P.O. Box 51034, Myrtle Beach, SC 29579.

Norbert has led an interesting, exciting and fulfilling life. Born in Breslau, Germany at the time the Nazis came to power, he fled Germany with his family to Shanghai, China in 1939. Arriving into a totally alien environment and with limited... View Obituary & Service Information

The family of Norbert Flatow created this Life Tributes page to make it easy to share your memories.

Norbert has led an interesting, exciting and fulfilling life....

Send flowers to the Flatow family.