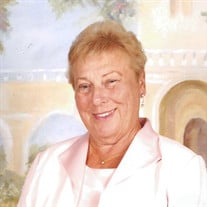 PATRICIA F. GEARY-COCUZZA (NEE DeGraaff) Pawleys Island, SC (formerly of Lyndhurst, NJ) Patricia passed away on October 25, 2019. She was born in Jersey City, NJ on June23rd, 1936 to Cornelius and Agnes DeGraaff. The family moved to Lyndhurst, NJ, where Pat graduated from Lyndhurst High School. She worked for some years at PSE&G before meeting her first husband, Thomas A. Geary. They were married for 22 years before he passed away in 1984. Pat & Tom began their family in Lyndhurst, NJ, where Pat played volleyball and coached/managed her daughters’ softball team. She was instrumental in improving the conditions for girls’ softball in Lyndhurst. She had a wonderful circle of friends and there was always a backyard party. Pat attended all of her daughters’ basketball & softball games and her son’s baseball and basketball games. After raising the family, Pat continued her education and became a tax preparer for H&R Block and later earned her CFP certificate. While at H&R Block, she met her second husband, Armando Cocuzza. They were married for 10 years before he passed away in 2005. Pat & Armand vacationed for years in South Carolina, enjoying golf and the beach there. After retirement, they relocated permanently to Pawleys Island, SC, where they met many friends who enjoyed golfing and the “19th hole”. Pat enjoyed hosting family holidays and creating memories with her family, always making delicious meals. She also enjoyed gardening and cruising on Royal Caribbean with her family. Pat was predeceased by her parents, Cornelius and Agnes DeGraaff, her first husband , Thomas A. Geary, her second husband, Armando Cocuzza, her sister, Janet (DeGraaff) Mohl, her daughter, Deborah A. Geary , late brother in laws, John Geary, William Geary and Justin McCarthy, late sister-in-laws Alice (Geary) Wormke, Mary Ellen McCarthy. Pat is survived by her daughter, Linda (Geary) Landrigan; her son, Michael J. Geary and his wife, Linda, grandchildren Thomas & Tracey Geary, Sean & Brian Landrigan, her brother Cornelius DeGraaff & wife Christine and many nieces, nephews, great nieces and great nephews. Services will be held at Goldfinch Funeral Home, Pawleys/Litchfield Chapel on Monday, October 28, 2019 from 4:00-7:00 pm. Funeral will be Tuesday, October 28, 2019 at 10:00 am at Precious Blood of Christ Catholic Church, Pawleys Island, SC. Cremation will be private. In lieu of flowers, the family requests donations be made to the Susan G Komen Foundation or Church of the Precious Blood, SC A celebration of her life will be held at Precious Blood of Christ Catholic Church on Tuesday, October 29, 2019 after church service. An online guestbook is available at www.goldfinchfuneralhome.com Goldfinch Funeral Home, Pawleys/Litchfield Chapel is in charge of the arrangements.

The family of Patricia F. Geary-Cocuzza created this Life Tributes page to make it easy to share your memories.

Send flowers to the Geary-Cocuzza family.