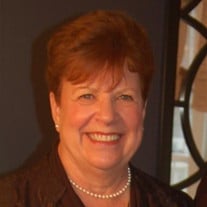 Patricia Berry Lewis, of Pawleys Island, SC, passed away unexpectedly on November 27, 2019. She was born on August 9, 1943 in Cleveland, Ohio, a daughter of the late Herbert Nathan Berry and Eleanor Malkowski Berry. She is survived by her husband of 51 years, James Carson Lewis, and son, Scott Carson Lewis, of Bristow, VA, his wife, Elizabeth, and grandchildren, Caroline Lewis, and Colin Lewis; a sister, Carol Haffner of North Royalton, Ohio, her husband, Harry Haffner, their children, Harry Haffner, Jr., David Haffner, both of North Royalton, Ohio, their wives and children; and nieces Debra Blackshear of Macon, Georgia, Janis Ricks of Roswell, Georgia, and Martha Crump of Hephzibah, Georgia; and nephews Bryan Ricks of Buford, Georgia, and Robert Hudson of Gordon, Georgia. Patricia attended college at Graceland University in Lamoni, Iowa and later joined the United States Foreign Service. She was assigned to the U.S. Embassy in Manila, Philippines where she met her husband, James, who was also in the Foreign Service. They were married in the Philippines and continued on an assignment to Frankfurt, Germany before returning to the United States where they settled in Springfield, Virginia. While in the Springfield community, she was employed by the Fairfax County School System as a crossing guard, and school nurse. Later she worked as a scheduler for the Woodburn Surgery Center. Following James’ retirement from the Department of State, they moved to Pawleys Island, SC in 1996. Patricia was employed at Brookgreen Gardens for a number of years and after leaving Brookgreen she was employed by the Long Bay Symphony. Later she volunteered at Waccamaw Community Hospital and at the Waccamaw Library. She was a great reader and enjoyed attending concerts and talking about books, attending the Movable Feast literary luncheons, and arts and cultural events. In lieu of flowers, please take some time to remember some of your nice memories of Patricia. You might also choose to donate in Patricia’s memory to the Long Bay Symphony, the Waccamaw Library, or the American Red Cross where Patricia was a long time blood donor. A Memorial Service will be held at 10:30 AM on Saturday December 7, 2019 at Goldfinch Funeral Home, Beach Chapel. The family will receive friends following the service. Goldfinch Funeral Home is handling arrangements. An additional memorial service will be planned for a later date in Northern Virginia.

Patricia Berry Lewis, of Pawleys Island, SC, passed away unexpectedly on November 27, 2019. She was born on August 9, 1943 in Cleveland, Ohio, a daughter of the late Herbert Nathan Berry and Eleanor Malkowski Berry. She is survived by her... View Obituary & Service Information

The family of Patricia Lewis created this Life Tributes page to make it easy to share your memories.