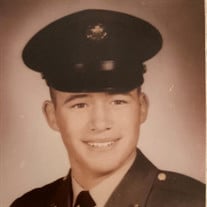 Paul Harvey Forbes, age 72, of Myrtle Beach passed away on Monday, June 7, 2021 at his home in Myrtle Beach, SC. A Celebration of his life will be at 2:00 PM, Saturday, June 12, 2021 at Beach Church, 557 George Bishop Pkwy in Myrtle Beach and visitation with refreshments will follow the service. Paul was born in Baltimore, Maryland to Janet Magnus Forbes and James Forbes, both of Baltimore, Maryland. He went to Delany High School and upon graduation he went into the Army and served one tour of duty in the Vietnam War. He has always looked out for others with a heart of gold before he did himself. He was injured by shrapnel and didn't tell medics because he said "My buddies need them worse than I do." While in Vietnam, he received an Air medal award among others. In his most recent years he suffered disabilities due to exposure to Agent Orange and PTSD. After his service in the US Army, he was a Builder/Developer first in Florida, where he was recognized for his outstanding design and later in Myrtle Beach where he met and then married the love of his life, Diane Hamilton on January 28, 1995. Paul is preceded in death by his parents, James Harris Forbes of Baltimore and Janet Magnus Forbes of Baltimore and later Myrtle Beach. Also, two brothers Jimmy Forbes of Baltimore and Geoffrey Forbes of Baltimore and Asheville, NC. Paul is survived by his beloved wife of 26 years, Diane Hamilton Forbes. He had three stepchildren, Sean Hamilton (Tiffany) of Conway, Tessa Hamilton and Rod Hamilton of Myrtle Beach. Also surviving are his siblings, Carole Forbes Hinkel Kelly and Chris Forbes (and Chris' children Renee and Christopher) both of Myrtle Beach, and two sisters of Baltimore, Alta Mack (and her daughter Jody) and Susan (Susie) Landis. He had five grandchildren, Hayes Hamilton (Anna) of Conway, Carson Hamilton Parks (Taylor) of Spartanburg, Gage Hamilton (Raegan), Cate Hamilton of Conway; and four great-grandchildren, Hadlee and Sailor Hamilton, and Hampton and Lily Parks. Paul loved music and dancing with his wife. He was a computer nerd before it was cool, doing his own building specs and drafts, and if he didn't understand something he blew up the phone with Silicone Valley. As he got older and more disabled, he enjoyed watching The History channel, Everybody Loves Raymond, gloating about his grandchildren and he adored rainy days. It was an almost everyday occurrence for him to ask, "Is it going to rain today?" We just smiled and said maybe. He was crazy about his Border Collie, Gracie! So much so, that there ended up being two Gracie's. When the first one passed away, with God's help we found her identical twin and he was so thrilled. In lieu of flowers, memorials can be made to: Disabled Veterans of American, 4601 Park Ave, Wilmington, NC 28403. Goldfinch Funeral Home, Conway Chapel is in charge of arrangements.

The family of Paul H. Forbes created this Life Tributes page to make it easy to share your memories.

Send flowers to the Forbes family.