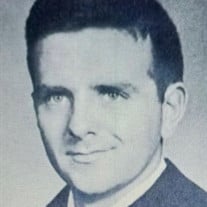 Pierce DeRoss Gammon "Buddy" passed away September 5th, 2021. He was 80 years old. Buddy was born in Cornelius, NC June 12th, 1942 to Raymond Pierce Gammon "Red" and Travis Caldwell Gammon. Buddy graduated from North Mecklenburg High School in 1965. He married Teresa Ann Isenhour in 1966 and they had 1 daughter, Loretta Gammon Megginson (husband Keith) of Charlotte, NC. Buddy has two sisters, Donna Gail Gammon of Statesville, NC and Myra Serita "Jill" Stanley of Four Oakes, NC. His brother John Phillip preceded him in death on February 16th, 1986. Buddy has two nephews, Scott Robinson of Charlotte, NC and Chuck Robinson of Charlotte, NC (sons of Donna Gail Gammon) niece's Tracey Leigh (daughter of Jill Stanley) Four Oakes, NC, and Von Robinson Shoupe (daughter of Donna Gammon) Albemarle, NC Buddy moved to North Myrtle Beach, SC in the early 70's where he met Marion Williams Gammon. They were married 48 years. Marion passed away November 2013, they had no children together. Buddy loved cars, racing, wrestling, baseball, and bowling. He and Marion loved their life together at Ocean Lakes Campground in Myrtle Beach, SC, where he was a security guard for many years. It is more than likely, if you ever stayed at Ocean Lakes, you were greeted at the gate by him. Buddy never met a stranger and was a friend to all that knew him. He had an infectious smile, was outgoing and always the life of the party. He was fun to be around and would always make you laugh. Buddy will be cremated. Goldfinch Funeral home in Conway, SC will be performing this service. There will not be a graveside service, however, all that wish to pay their respects or say their goodbyes, he will be laid to rest at Hilcrest Mausoleum, beside his love, Marian. In lieu of flowers, you can donate to the Human Society of Horry County in his name. Buddy loved his cat's. https://www.grandstrandhumanesociety.com/how-you-can-help/donate/

The family of Pierce D. Gammon created this Life Tributes page to make it easy to share your memories.

Send flowers to the Gammon family.