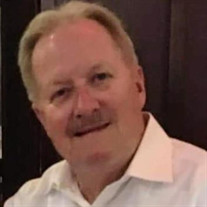 Randy Kuntz passed away on Sunday, December 20, 2020 at Tidelands Waccamaw Community Hospital. He was 71 years old. Randy was born in Mishawaka, IN on January 27, 1949 to the late Kenneth Eugene and Beverly Smith Kuntz. He graduated from Penn High School in Mishawaka, IN and continued his education taking college courses. Randy was also a Vietnam veteran of the U.S. Marine Corps. Randy made his career at IBM and most recently as a District Manager with Giesecke & Devrient America in Dulles, VA. During his 20-year tenure there, he met Dixie and they had a long-distance relationship until Dixie moved to Houston, TX so that they could be together. Randy married Dixie, the love of his life, in 1999. They lived in Houston, TX and Atlanta, GA, and they retired to the home of their dreams in Murrells Inlet, SC, in 2014. Randy had a love of planes, cars, and motorcycles and developed friendships around his hobbies. He enjoyed building and flying radio-controlled, electric, and gas-powered planes. And he was a member of the Southeastern Modelers RC Flying Club in Tabor City, NC. He appreciated classic cars and bought, rebuilt, and sold three of them in the last 20 years. And if he couldn’t find a part that he needed, he had a lathe that was gifted to him from a dear friend, so he could make it! And he truly relished riding the Tail of the Dragon (with its 318 curves in 11 miles) on his Harley Sportster, “Blackie,” with his buddies in Deals Gap, TN. Randy adored water, both frozen and thawed! He was a graceful ice skater for many years (although you can’t do a lot of that in the South), and he told some wonderful stories about his ice skating adventures. He delighted in his time on the ocean in his fishing boat, “Ranger Bob,” another reason that compelled he and Dixie to retire to Murrells Inlet, a small community with great fishing. Randy had lots of hobbies and interests, but most of all, Randy connected with people and was a great friend to everyone he met. He was always helping someone or, if asked for his advice, he would gladly share his knowledge. Although Randy cherished his many dear friends and had varied interests, he was always, first and foremost, a loving and supportive husband to Dixie. In addition to his beloved wife of 21 years, Dixie, Randy is survived by his son, Brian (Reema) Shown, of Belmont, CA; his sister, Dian (John) Hawkins, of Osceola, IN; his brothers-in-law, Raymond (Kathy) Hicks, of Florence, SC; Travis (Maria) Hicks, of Raleigh, NC; his sister-in-law, Annie (Jason) Miller, of Georgetown, SC ; two grandchildren; Taj and Kaiden Shown, and numerous nieces and nephews: Jason, Kaston, Cristina, Brian, Ben, Chase, Ainsley, Allysa, Kelly, Dawson, Hayden, Abby, Shay, Emma, Alison, Chris, and Alex. In lieu of flowers, please consider a donation to All 4 Paws Animal Rescue (all4pawssc.org), Pawleys Island, SC or any local animal rescue/no kill shelters for cats and dogs or to the Salvation Army (www.salvationarmycarolinas.org/horrycounty/). A Celebration of Life Service will be held in the Spring, 2021.

Randy Kuntz passed away on Sunday, December 20, 2020 at Tidelands Waccamaw Community Hospital. He was 71 years old. Randy was born in Mishawaka, IN on January 27, 1949 to the late Kenneth Eugene and Beverly Smith Kuntz. He graduated from Penn... View Obituary & Service Information

The family of Randall "Randy" Ray Kuntz created this Life Tributes page to make it easy to share your memories.

Send flowers to the Kuntz family.