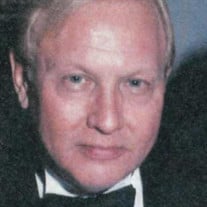 Raymond F. “Ray” Bittner passed away suddenly on Sunday, January 23, 2022, at the age of 85 with his wife by his side. Ray was born on January 13, 1937, in Queens, NY to the late Raymond and Grace Bittner. He travelled his whole life. He graduated from high school in the morning and joined the US Army in the afternoon. The Army promised to teach him photography, but instead sent him to Le Havre, France where he was assigned to the engineers, building roads and bridges. After leaving the Army in the late 1950’s, he worked as a traveling salesman in the garment industry. For over 50 years he worked in the men’s garment business as a salesman, a merchandiser and designer. He was a marketing director, president and CEO of various fashion companies. He travelled to Europe, Asia, Africa and South America, sometimes going around the world 4 times a year. He loved living and working in New York City but retired to Pawleys Island in 1997. Ray is preceded in death by his brothers Ron, Michael and Robert Bittner. He is survived by his wife of 45 years and best friend, Sarah A. Johnson; his son, Shawn Bittner of Morristown, NJ; brother, Dennis Bittner and his wife Sandy of Mountville, PA; sister, Roberta Newton and her husband John of Millersville, PA; sister-in-law, Sue Bittner of Miller Place, NY; several nieces and nephews. He will be missed by all that knew him. A Celebration of Life Service will be held at a later date. Goldfinch Funeral Home, Beach Chapel is assisting the family.

The family of Raymond "Ray" F Bittner created this Life Tributes page to make it easy to share your memories.

Send flowers to the Bittner family.