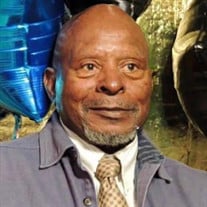 On Sunday, April 11, 2021, the Lord called to eternal rest His chosen Mr. Remus Smalls. Remus Smalls, the son of the late Herman and Lucille Smalls was born on May 22, 1942 in Charleston, SC. He was preceded in death by his siblings Leon Smalls, Ralph Smalls, his Godmother Clara Ramsey and 2 great grandchildren. Remus was educated in Charleston County Public Schools. He was a graduate of the W. Gresham Meggett High School, Class of 1960. In 1966, Remus was drafted into the United States Army where he proudly served his country for over 3 years which included a tour in the Vietnam War. For his commitment and bravery as a Sergeant he was awarded 2 Purple Hearts and received an Honorable discharge. Later, he worked for 20 years as an essential transporter with International Brotherhood Electrical Workers Union and retiring in 2006. On May 22, 1966 Remus became one with Mrs. Mamie Whack Smalls. Their marriage of 54 years reflected their love and dedication to each other that reminds us all to have faith and trust in God’s eternal love. Remus was the patriarch of his family and friends. A “Man amongst Men” he made his presence known and lasting with everyone he interacted with. His words of wisdom taught us all how to enjoy life with laughter and humility but to live with integrity and purpose. Remus was a sports fan and enjoyed watching his favorite football team the Pittsburgh Steelers. He also loved watching golf and looked forward to watching the Masters every year. He was also a man who enjoyed nature and being outdoors. But probably more than anything, Remus enjoyed entertaining family and friends whether it be during large gatherings during holidays and special occasions or just hanging out with his “compadre” and brother in-law BB. He truly cherished the relationships he had with family and friends and he made sure you knew it. If he could, he would lend you a helping hand and even if he could not, he would often say “The best thing I can give you is some good advice” and then he would proceed to do so. Remus was a man of great integrity, wisdom and compassion and the legacy he leaves behind will by far surpass the fulfilling 78 years he lived. Lasting memories of Mr. Remus Smalls will be cherished by his devoted wife Mamie Smalls; his loving children Juanita Champagne, Perneitha Smalls, Remus (Latrice) Smalls and Socrates (Danene) Smalls; 9 grandchildren and 9 great grandchildren; siblings Hermina Hopkins; Juanita Smalls, Wanda Breach, Margaret Moore, Frances Smalls and Jerome (Myra) Smalls, 4 sisters in-law, 6 brothers in-law and a host of other nieces, nephews, cousins and other close friends. A memorial service will be held at 2:00 PM Saturday, April 17, 2021 at Goldfinch Funeral Home, Beach Chapel with Dr. James Williams officiating. The family will receive friends from 1:00-1:45 PM prior to the service.

On Sunday, April 11, 2021, the Lord called to eternal rest His chosen Mr. Remus Smalls. Remus Smalls, the son of the late Herman and Lucille Smalls was born on May 22, 1942 in Charleston, SC. He was preceded in death by his siblings Leon Smalls,... View Obituary & Service Information

The family of Remus Smalls created this Life Tributes page to make it easy to share your memories.

Send flowers to the Smalls family.