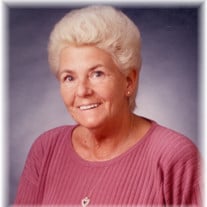 Conway... Renate G. Wilson, age 82, passed away Friday, June 25, 2021. Renate was born May 12, 1939 in Berlin, Charlottenburg, Germany. She was the daughter of the late Franz Bottcher and Else Regber Bottcher. Renate's father passed when she was young, so she was raised by her mother and had one sister. They were very poor and would sell cigarettes to help her mom buy food, which consisted of a few slices of bread. Renate married Geary Evans Wilson on March 2, 1961 while he was stationed in Germany. She became a U.S. Citizen on August 26, 1969, which is something she was so proud of. She would always say that people in America did not know how lucky they were to live in a free country and to have opportunities to be whatever they wanted to be. In Germany, she could not listen to a radio. She learned English and her first job was scrubbing big pots in a restaurant. She was a hard worker and believed that whatever job you had, to always do your best. Renate later started a job at AVX, where she retired after 32 years. She had a soft spot for kids and loved to help people in need. She would save loose change in a jar and when she got enough money, she would take some elderly people that did not get out of the house much and go for pizza. During the holidays, she would give to those in need. If she did not agree with you about something, she would voice her own opinion. She loved to go shopping, go out to eat, and get her nails done. She had a secret recipe for German potato salad and only shared it with her special friend. It will always be their secret. When Renate was in the assisted living, she wanted to buy roses for some of the nurses that helped her. In the last facility, she bought pizza for the residents on her floor. Along with her parents, Renate was predeceased by her husband, Geary Evans Wilson, who passed in 2000. Graveside services will be held at 11:00 AM Tuesday, June 29, 2021 at Hillcrest Cemetery with Rev. John Holmes officiating. Please sign the online guestbook at www.goldfinchfuneralhome.com Goldfinch Funeral Home, Conway Chapel is in charge of arrangements.

Conway... Renate G. Wilson, age 82, passed away Friday, June 25, 2021. Renate was born May 12, 1939 in Berlin, Charlottenburg, Germany. She was the daughter of the late Franz Bottcher and Else Regber Bottcher. Renate's father passed when she... View Obituary & Service Information

The family of Renate Gertrude Wilson created this Life Tributes page to make it easy to share your memories.

Send flowers to the Wilson family.