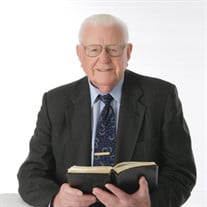 Rev. Urii Maruschak, 90, went home to be with the Lord on September 24, 2020. Throughout his life he was a faithful servant of God. Urii was born on June 29, 1930 in Harbin, China (Manchuria). He and his family immigrated to Sao Paulo, Brazil in 1953 where he became a member of the First Ukrainian Baptist Church of Sao Paulo. This is where he met his loving wife, Wira, whom he first saw singing in the church choir. They married in 1957. He was baptized in 1955, graduated from a theological studies program and began his life-long joyful service to the Lord. After moving to the Philadelphia area in 1961, Urii began his work within the church. He served as the youth Sunday School teacher and was ordained as a deacon in 1963. The family moved to Minneapolis in 1966 where he continued his service with the Ukrainian Baptist Church as Sunday School teacher, deacon and church secretary. In 1992 he was ordained as a minister and served wholeheartedly as the pastor of the First Ukrainian Baptist Church of Minneapolis from 1992 – 2007. After moving to the Myrtle Beach area in 2007 to live near their daughter and son-in-law, they became members of Socastee Baptist Church. He was a special man who dearly loved his family and loved to share his love of God and how God blessed him, protected him and led him throughout his life. He was a gentle man with a gold heart. Above all, he loved his Lord and Savior Jesus Christ. He never ceased praying and awaited the day when he would be in the presence of his Savior. He is survived by his wife, Wira, daughter Lilia Kearney (Tim), son Leonid (Nancy; Greg), brother Vitaly (Emilia), sisters-in-law Anna Jankowski and Carol Maruschak, nephews David Jankowski (Natalia; Gaby, Ricky), Jonathan Jankowski (Anna), Sergio Maruschak (Lee Anne; Alexander, Nicholas, Nora) and niece Natalia Maruschak. Predeceased by his parents, Eugene and Natalia Maruschak, his brother Gennady Maruschak, brother-in-law Richard Jankowski, father-in-law Mykola Bezditko and his much-loved mother-in-law Maria Bezditko. Visitation and funeral service will be on Saturday, October 3 at Socastee Baptist Church. Visitation will be from 1 pm – 2 pm followed by a service led by Dr. Micah Lane. Burial will be at Hillcrest Cemetery in Conway. Fellowship follows at Socastee Baptist Church. Funeral arrangements are being handled by Goldfinch Funeral Home Beach Chapel. Floral arrangements are being handled by Beach Buds Florist in Surfside Beach. In lieu of flowers, memorial donations may be made to Socastee Baptist Church (3690 Socastee Blvd, Socastee SC 29588).

Rev. Urii Maruschak, 90, went home to be with the Lord on September 24, 2020. Throughout his life he was a faithful servant of God. Urii was born on June 29, 1930 in Harbin, China (Manchuria). He and his family immigrated to Sao Paulo, Brazil... View Obituary & Service Information

The family of Rev.Urii Maruschak created this Life Tributes page to make it easy to share your memories.

Rev. Urii Maruschak, 90, went home to be with the Lord on September...

Send flowers to the Maruschak family.