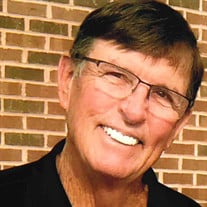 Richard Lee Kerr, 77, passed away May 22, 2020 at his residence in Pawleys Island, SC after a courageous battle with Idiopathy Pulmonary Fibrosis (IPF). Born August 31, 1942, Richard was predeceased by his parents Lee S. Kerr and Edith R. Kerr of Knoxville, TN. Mr. Kerr is survived by his devoted wife Grace Kelley of Pawleys Island, SC. He is also survived by his brother Robert “Bob” (Beverly) Kerr of Alcoa, TN, his son Brad (Stephanie) Kerr of Franklin, TN, daughters Paige Preston (Taylor) of Knoxville, TN and Kelley Grace Kerr of Pawleys Island, SC. He is survived by five grandchildren Chad, Ryan and Alex Preston and Maddie and Jake Kerr. Richard was a graduate of the University of Tennessee in 1965 with a degree in industrial engineering. He then served in the U.S. Air Force from which he was honorable discharged as a Captain. He was employed by Alcoa for 15 years. He became an executive at International Metals Company (IMCO) in Rockwood, TN, from which he was instrumental in developing the largest aluminum recycling company in the world. He lived in Dallas, TX before retiring to Pawleys Island, SC in 2004. He served 8 years on the Georgetown County School Board. Richard enjoyed being a loving husband, father, grandfather, brother, and friend. He loved fishing, hunting, playing bridge, supporting UT sports, and watching his daughter, Kelley Grace dance. He enjoyed his lake house in Louisville, TN and the views from his home on the creek in Pawleys Island, SC. A private celebration of life will be held at a later date. Please sign the online guestbook at www.goldfinchfuneralhome.com. Goldfinch Funeral Home, Beach Chapel is serving the family.

The family of Richard Lee Kerr created this Life Tributes page to make it easy to share your memories.

Send flowers to the Kerr family.