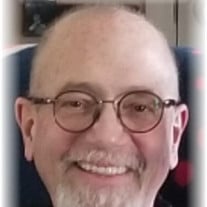 Conway… Richard Alan Silverstein, 67 of Conway South Carolina, cherished husband, father and Papa passed away peacefully at home with his loving wife of 44 years and his daughters by his side on May 5, 2021. Rich was born March 8, 1954 to Harry and Gloria Silverstein in Malden, Massachusetts and proudly shared his birthday with his father. He grew up in Massachusetts and graduated from Beverly High School in 1972 where he would proudly tell the story of the time he saw Aerosmith play at the school, before they were "big". After high school Rich became a Beverly auxiliary police officer before settling into a lifelong computer and analytics career. Rich was hired at Richo as a copier technician and worked his way up to senior management and retired after 40 faithful years. Richard is survived by the love of his life and best friend, Kathleen whom he married on May 22, 1977. He is also survived by his three children and eight grandchildren. Melissa (Silverstein) Nadeau and her husband Ian of Ellington, CT and their three children Addisyn, Carly and Maxwell; Dorothy (Silverstein) Ruggiero and her husband Anthony of Somers, CT and their four children Jacob, Lucas, Nathan and Matthew; Joseph Silverstein and his wife Shannon of Enfield, CT and their son Abraham. Rich is survived by his brother, Joel and his wife Kristin Silverstein of Beverly, MA and their two children Benjamin and Eli and his brother Mike Silverstein of Beverly, MA. In the last few months of Rich's time with us, he talked of his children and grandchildren being his legacy and greatest achievements. Being "Dadzo, "Fajah", and "Papa" were a few of Rich's greatest joys in life. To know Rich was to know a love and passion for music and live concerts. In his lifetime he saw hundreds of live shows, often with one or all three of his children. Rich was well known for his eclectic taste in music, particularly rock and heavy metal. He often referred to himself as an "old geezer metal head". Sports and in particular, New England Sports held an incredibly special place in Rich's heart, having a deep love for the Boston Red Sox and New England Patriots. Although not a die-hard basketball fan, he did enjoy telling stories of the time he sat in the first row in Boston to watch Larry Bird play in the 1980's. An avid walker, Rich was also known for his six mile a day walks throughout Ellington before he and Kathleen moved to South Carolina. As those walks continued, he met some of his closest Rosehaven neighborhood friends. Rich's family would like to extend heartfelt appreciation for the medical team of MUSC and Dr. Brian Hess as well as McLeod hospice, in particular Kelly B. Kathleen and her children will receive friends at the Goldfinch Funeral Home in Conway, SC on Saturday May 8, 2021 at 10:00 AM. A celebration of life in Rich's honor will be held at a later date with details forthcoming. In lieu of flowers, memorial donations may be made to the American Cancer Society, P.O. Box 22478, Oklahoma City, OK 7312 or the American Heart Association, 10 Glenlake Pkwy NE South Tower, Suite 400, Atlanta, GA 30328. Please sign the online guestbook at www.goldfinchfuneralhome.com Goldfinch Funeral Home, Conway Chapel is in charge of arrangements.

Conway&#8230; Richard Alan Silverstein, 67 of Conway South Carolina, cherished husband, father and Papa passed away peacefully at home with his loving wife of 44 years and his daughters by his side on May 5, 2021. Rich was born March 8, 1954... View Obituary & Service Information

The family of Richard Alan Silverstein created this Life Tributes page to make it easy to share your memories.

Send flowers to the Silverstein family.