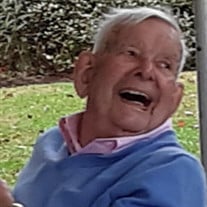 Pawleys Island……. Robert Joseph “Bob” Keller, 90, of Pawleys Island, passed away Tuesday, September 28, 2021 at Tidelands Waccamaw Community Hospital. Bob was born in Wheeling, West Virginia on October 29, 1930 to Edgar B. and Ruth E. Keller. After living in the small town of Reedy, WV the family relocated to Washington, DC during the Great Depression. He graduated from Eastern High School where he competed on the football and track teams. Following graduation, Bob enlisted and proudly served his country in the United States Air Force during the Korean War. Upon returning to civilian life, he went to work as an accountant for the Howard P. Foley Company, which, was headquartered in Washington, DC. He earned a degree in business and accounting from the Ben Franklin University and later rose to become the Secretary and Controller for the Corporation. He was a member of St. Peter's Lutheran Church in Pawleys Island. Prior to moving to Pawleys Island he and his late wife were active members of Concordia Lutheran Church in Triangle, VA. Bob was also an active, long-time member and former President of the Kiwanis Club in Woodbridge, VA. Bob came from a railroad family, had an affinity for rail travel and was always proud of his West Virginia roots. He enjoyed boating with his family in Virginia and he always looked at the positive side of things. He was an avid reader and enjoyed watching westerns and war movies. Bob loved to joke and kid around and was a kid at heart. He was a member of the Tradition Men’s Gold Club, the Gold Tees and the Apostles golf groups. Bob was an avid Washington Football Team (Redskins) fan and, as a teenager was an usher for Redskins games at Griffith Stadium in Washington DC. Bob will be remembered for his sportsmanship, big warm smile, great sense of humor and his love for his family and friends. He is preceded in death by the love of his life, his wife of 62 years, Mary Ann Keller. Bob is survived by his son, Ronald J. Keller and his wife Krislyn of Lewes, DE; daughter, Donna L. Keller and partner Richard Desrochers of Pawleys Island, grandchildren, Miles J. Keller and his wife Devyn and great-grandson Ewan Haynes Keller of Richmond, VA; Graham M. Keller of Alexandria, VA; Julianne G. Keller of Austin, TX; brother, Michael F. Keller of Bunker Hill, WV and special companion and dearly loved friend, Joan Davis of Pawleys Island. He also leaves behind several nieces, nephews, cousins and close special friends. A Memorial Service will be held at 11:00 AM, Wednesday, October 13, 2021 at St. Peter's Lutheran Church, Pawleys Island with Pastor Greg Van Dyke officiating. Inurnment will be held at Quantico National Cemetery, Triangle, VA. at a later date. The family will receive friends at the church 30 minutes prior to the service. A luncheon reception will be held at the church following the service. In lieu of flowers, memorials may be given in Bob’s name to the Pawleys Island Kiwanis Club, P.O. Box 2960 Pawleys Island, SC 29585. Goldfinch Funeral Home, Beach Chapel is handling the arrangements

The family of Robert "Bob" Keller created this Life Tributes page to make it easy to share your memories.

Send flowers to the Keller family.