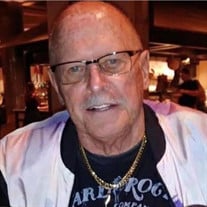 Robert Edward Mitchell, loving husband and family member passed away on January 19, 2022, at age 81 at Tidelands Waccamaw Community Hospital, Murrells Inlet, South Carolina. Robert, mostly know as “Bob,” was a bright light even in the darkest of days. His selfless spirit, generous heart and unconditional love for his family will be forever missed. Robert was born in Bayshore, New York on September 13, 1940. He was an Army veteran and after discharge became the backbone of Collins Brother’s Moving Company out of Larchmont, New York. Robert spent most of his life lending a hand to whomever needed it at any time or any given moment. He was often referred to as “Saint Bob,” by many because if there was ever a guardian angel that walked this earth, “Uncle Bob,” “Saint Bob,” Robert-was him. Additionally, amongst his work family, and his wife Patty, Robert was fondly referred to as “Mitch,” as well. Robert is survived by his loving wife Patty Mitchell, his brother Charlie Wagner, and his sister Jean Cheruk. Additional family members include, his sister in-law Theresa Laudone, brother in-law Nick Stano, and his nieces Debra Guglielmi, Gina Laudone, Danielle Laudone, Jennifer Stano, and his nephew Steven Stano. A funeral mass will be held 10:00 AM, Friday, January 28, 2022 at the Precious Blood of Christ Catholic Church in Pawleys Island, SC. A celebration of life will follow. In lieu of flowers, the family requests that donations be made to a foundation that Robert was passionate about, Tunnel to Towers Foundation, 2361 Hylan Boulevard, Staten Island, NY 10306.

The family of Robert Edward Mitchell created this Life Tributes page to make it easy to share your memories.

Send flowers to the Mitchell family.