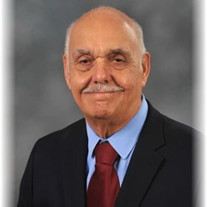 Aynor… Robert Lee Rabon, age 70, went to be with his Lord and Savior on Friday, November 13, 2020. Born September 4, 1950 in Conway, he was the son of the late Empie Bart and Mandie Gasque Rabon. Robert was a life-long resident of Horry County and a graduate of Aynor High School and attended Coastal Carolina University, which he later served as a member of the Board of Trustees from 1998 to 2009. He also served on the Horry County Higher Education Commission from 1986 to 1998. As campaign chairman of the Penny Local Option Sales Tax benefiting building projects for Horry County Schools, Horry-Georgetown Technical College and CCU, Robert has significantly advanced the cause of education in the county over the past decade. Robert became a licensed insurance broker and a real estate broker in 1976. He established Rabon's Housing Center in 1979, the same year he began serving on the Horry County Council. Robert has dedicated many years of his life to the Horry County Republican Party, serving as county chairman of the party from 2005 to 2011 and again from 2013 to 2017. As chairman, he helped organize the county's first presidential debate in 2008, an event that brought notable recognition to the area. He has owned Associated Realty since 2006. Robert has also served in the Aynor Lions Club, Conway Rotary Club, S.C. Manufactured Housing Board, Highway 31 Task Force, Myrtle Beach Regional Economic Development Corporation, United Carolina Bank Board, and the Grand Strand Water and Sewer Authority Board of Directors. Robert was a self-made man. He was born the son of a sharecropper, and he worked tirelessly to make a difference in this world. He was a community servant. He loved God, his family, and his country. He wanted to make this world a better place for his family and community. He served as a Sunday School teacher for many, many years. He loved spending time with his family on vacations and always made time for people and his friends. His favorite phrase was "Call the World and Tell Them I'm Coming" Robert was a member of Conway Church of God. He was a loving father and Poppy, who will be missed dearly. Along with his parents, Robert was predeceased by a brother, Jack Rabon and four sisters, Nina Lee Dew, Melva Dean Gore, Letha Ard, and Wilma Lee Chestnut. Surviving are his four children, Amanda Rabon, Sherrie Brown (Joe), Robin Niederwerfer (Jon), and Seth Rabon; nine grandchildren, Alayna Mincey, Gabe Brown, Mallorie Brown, McCallie Brown, Emma Niederwerfer, Ben Niederwerfer, Paylen Rabon, Chloe Rabon, and Dawson Rabon; three sisters, Vila Ree Stevens (Wade), Marie Dew, and Wanda Rabon; and many loving nieces and nephews. Funeral services will be held at 2:00 PM Monday, November 16, 2020 at Conway Church of God with Rev. Stuart Jacobs and Rev. Buddy Seay officiating. Burial will follow at Hillcrest Cemetery. The family will receive friends at the church on Sunday evening from 5:00-7:00 PM. Memorial donations may be made to Conway Church of God, Building Fund, PO Box 879, Conway, SC 29528 or The Horry County Republican Party, P.O. Box 50662 Myrtle Beach, SC 29579. Please sign the online guestbook at www.goldfinchfuneralhome.com Goldfinch Funeral Home, Conway Chapel is in charge of arrangements.

Aynor&#8230; Robert Lee Rabon, age 70, went to be with his Lord and Savior on Friday, November 13, 2020. Born September 4, 1950 in Conway, he was the son of the late Empie Bart and Mandie Gasque Rabon. Robert was a life-long resident of Horry... View Obituary & Service Information

The family of Robert Lee Rabon created this Life Tributes page to make it easy to share your memories.

Send flowers to the Rabon family.