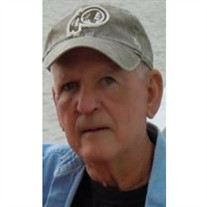 Robert (Bob) Francis Routt July 12, 1939 - August 14, 2020 Bob Routt of Surfside Beach, SC, died Friday, August 14th, at Grand Strand Medical Center surrounded by family. Bob was born July 12, 1939 in Washington, DC to the late Francis Ray and Catherine Rita Gallagher Routt. He lived most of his life in the Maryland/Virginia area, moving to Surfside Beach in 2007. He is survived by his wife, Joyce Lynn Routt; two daughters, Cynthia Leah Schwartz and her husband Daniel of Raleigh, NC, and Teresa Marie Padgett and husband Charles of LaPlata, MD, two sons, Robert Francis Routt, Jr. and his wife Kammie of Spokane, WA, and Thomas Lamar Routt and Brooke of Bend, OR, and stepson Scott Bouwkamp of Grand Rapids, MI; two sisters, Rita Jean Roman and her husband Bob, and Frances Rae Routt, both of Surfside Beach, SC and one brother John Joseph Routt and his wife Kathy of Silver Spring, MD; ten grandchildren, thirteen great grandchildren, and his nieces and nephews. He was preceded in death by a daughter, Deborah Joyce Routt. Bob graduated from Archbishop Carroll High School in Washington, DC in 1957, where he played football as a tight end, basketball and baseball. He attended the University of Maryland leaving to pursue a career with the US Department of Veterans Affairs (VA) in Washington, DC. Starting as a GS-1, he retired after 36 years as the Director of ADP and Financial Audit and Security. He was an avid bowler, including duck pins, and played pool since childhood- growing up with a pool table in his childhood home, and he loved getting together with friends and family to play cards. He especially enjoyed playing baseball/softball. He played on the VA’s inter-agency baseball team, as a pitcher and shortstop, practicing after work on the National Mall, and continued to play through the senior leagues. He also bowled on the VA’s inter-agency bowling team. He was an excellent dancer and would jump at the opportunity to dance some of his favorites such as the foxtrot, four step, jitterbug and his James Brown moves to “I Feel Good”. A big fan of the Washington Redskins and the Washington Nationals, he loved watching them play. Watching the horse races was a favorite, especially attending the Preakness. He enjoyed going to Atlantic City and on cruises, driving his Cadillacs and spending time on the beach, which is one reason he decided to retire in Surfside Beach. The funeral service will be held Saturday, August 22nd, at Goldfinch Funeral Home, Beach Chapel, in Murrells Inlet, SC. We are saddened that due to Covid-19 restricting attendance, the services are limited to family, but are heartened that so many of his family will be able to attend. Interment will be held after the service at St. Michael’s Catholic Church Columbarium, Murrells Inlet, SC. As this service is outside, attendance is open. Memorial contributions may be made to the St. Michael’s Catholic Church, 542 Cypress Avenue, Murrells Inlet, SC 29576. Goldfinch Funeral Home, Beach Chapel, is serving the family.

The family of Robert Routt created this Life Tributes page to make it easy to share your memories.

Send flowers to the Routt family.