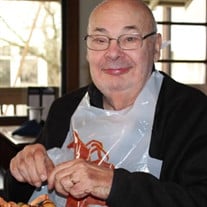 Ronald Schenk of Pawleys Island, SC, passed away after a lengthy illness on Tuesday, July 28, 2020 at Waccamaw Hospital. He was 75 years old. He is survived by his wife of 53 years, Donna Napoli Schenk, and by his children, Kristen Diamond and her husband Bob, of Atlanta, GA, and Jennifer Sacco and her husband, Michael, of Hamden CT, as well as 7 grandchildren and numerous nephews and nieces. He is preceded in death by his parents, Mary and Albin Schenk, and sisters Barbara and Shirley. Ron was born in Elizabeth, NJ and graduated Summa Cum Laude from Rutgers University. He pursued a doctorate at Teachers College, Columbia University, New York and went on to careers in college administration and educational publishing. Ten years before retiring , Ron joined the faculty of Wilmington College, Wilmington, OH where he was Director of the Prison College Program. He considered these last years of his working life to be his most rewarding. We refer to this time as “the Ron Schenk Redemption.” Ron felt he lived a charmed life and enjoyed extensive world travel, as well as good food and wine. He was an avid fisherman and was delighted to retire near the ocean to Pawleys Island, SC. He had a love of saying words backwards. He was the captain of the “Toy Yot,” and kept his food cold in the rotaregirfer. He also wrote scathing letters to the presidents of many corporations when a commercial injustice had been committed. Memorial gifts can be sent to EMERGE CONNECTICUT, INC., a social enterprise that helps the formerly incarcerated make a successful return to their communities. It is located at 830 Grand Avenue, New Haven, CT 06511 (203-562-0171). Donations can be made directly to their Website at emergect.net There is a place where you can “write a note” on the PayPal platform to indicate “in memory of Ron Schenk.” A memorial service will be held at a future date.

Ronald Schenk of Pawleys Island, SC, passed away after a lengthy illness on Tuesday, July 28, 2020 at Waccamaw Hospital. He was 75 years old. He is survived by his wife of 53 years, Donna Napoli Schenk, and by his children, Kristen Diamond... View Obituary & Service Information

The family of Ronald Schenk created this Life Tributes page to make it easy to share your memories.

Ronald Schenk of Pawleys Island, SC, passed away after a lengthy...

Send flowers to the Schenk family.