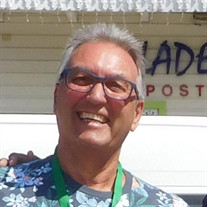 Steven Dale Coats, 65, of Myrtle Beach, passed away unexpectedly after a brief illness on August 11, 2020. Steven was born May 11, 1955 in Canandaigua, New York, a son to the late Richard and Betty Coats. In his youth, Steve attended and graduated from Canandaigua Academy in 1973. While there, he played football and the team became the League Champions in 1973. They only lost one game that year and Steve was named all conference. He also wrestled while in high school and was a regional champion in wrestling and went on to compete in the state tournament. In life it can be said that Steve never met a stranger. Steve was the owner and operator of Steve Coats Painting & Wallcoverings for 34 years; first in Rochester, NY and then in Myrtle Beach, SC after he moved there in 1998. In his leisure time, Steve loved watching Syracuse basketball and he also held season tickets for Coastal Carolina University baseball. He loved cheering on the Buffalo Bills but always rooted for America's team, the Dallas Cowboys, as well. In summer, he enjoyed a family water volleyball game every sunny weekend in the backyard swimming pool. He always enjoyed the fun and competition and spending time with his family. Steve is remembered by his family as a loving husband and a wonderful father. He is survived by his devoted wife of 37 years, Diane Coats and his dear children; son Steven, son Alexander (Jennea) and daughter Sarah. He is also survived by his siblings; Ricky (Wanda), Barbara (Rob), Cathy (Paul) and Julie (Tim). He will be sorely missed by all of his family and many friends and course Bailey, Sadie, Sammy, Raphie, and Gracie (his fur babies). Per his wishes, Steven was cremated. Goldfinch Funeral Home of Carolina Forest is honored to serve his family. He will be interred at Hillcrest Cemetery when the pandemic is over. At that time, the family will also host a party to celebrate and honor his life.

Steven Dale Coats, 65, of Myrtle Beach, passed away unexpectedly after a brief illness on August 11, 2020. Steven was born May 11, 1955 in Canandaigua, New York, a son to the late Richard and Betty Coats. In his youth, Steve attended and graduated... View Obituary & Service Information

The family of Steven Dale Coats created this Life Tributes page to make it easy to share your memories.

Send flowers to the Coats family.