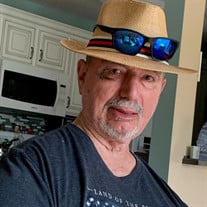 Thomas J. Terzi, loving husband, stepfather, and brother is survived by his wife, Stephanie Terzi, along with his three step daughters, LeeAllison Klimansky, Rachael Baxter, and Elena Werle, his two son-in-laws Matthew Klimansky, and Grant Werle, granddaughter Madison Klimansky, his sister Susan Palmer, brothers, Timmy Terzi and Bobby Terzi, his wife Marcy, and his three nephews Mark Terzi, Joey Terzi, and Jesse Terzi. Tommy was predeceased by his parents Anthony Terzi, and Mary Grace Terzi, and brother Anthony Terzi, Jr. Tommy was full of life and had a strong Faith in God . He loved his wife and family very much and considered many of his close friends, his family. Tommy spent most of his career working as a stagehand at ABC, where he developed lifelong friendships from his time working on the day time drama "Loving" along with various other studio projects. He also spent some of his career working at Avery Fisher Hall, The Savoy, and Carnegie Hall. Most of all, Tommy had a passion for entertaining his family and friends with songs and laughter, playing games, and sharing stories of his past experiences and traveling adventures. Tommy brought a little joy to everyone he met and will be greatly missed. Services will be at a later date. Goldfinch Funeral Home, Beach Chapel is serving the family.

The family of Thomas J. Terzi created this Life Tributes page to make it easy to share your memories.

Send flowers to the Terzi family.