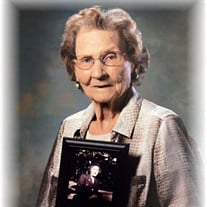 Treva Lowrance Greene, age 100, passed away on Monday, August 2, 2021, in her home in Conway, SC. A much-loved mother, grandmother, and sister, a trusted confidante, and a highly respected surgical nurse, she leaves behind family and friends who will forever fondly remember her warm generosity, Christian kindness, and wise counsel. She was born in Forest City, NC in 1921 to Colin C. and Ada Hill Lowrance and graduated from Cooley Springs High School there. After graduating from Presbyterian Hospital School of Nursing in Charlotte, NC in 1942, she began working as a private duty nurse until she took her place among our nation's military heroes as part of the Greatest Generation in 1943. She was commissioned as an Army Air Force surgical nurse with the 121st Evacuation Hospital and followed Patton's Third Army through the European theater which included the German Rhineland where she dealt with the aftermath of the Battle of the Bulge. After the war, she returned to the Forest City to work with a physician there. She met and married Vance Greene of Holly, NC in 1946; the couple moved to Conway and had two children. She worked with the Conway Hospital for 12 years, the Myrtle Beach Air Force Base Hospital for 8 years, and again with the Conway Hospital for 23 years before retiring in June of 1991. She had been an avid golfer when her health allowed, enjoyed weekly fellowship with a ladies' knitting club in Conway, and was a faithful member of Conway First Baptist Church until her death. Treva was pre-deceased by her beloved husband of 51 years, Vance Greene; two brothers, Wheeler Lowrance and Steve Lowrance, and an infant brother, Jack Lowrance, all of NC. She is survived by a son, Bucky Greene, of Conway and his daughters, Crystal Greene Tiller, and husband, Raymond of Loris, SC, and Kelly Greene Jordan, and husband, John of Conway; a daughter, Coleen Greene Judd and husband, Chip, of Georgetown, SC and their children, Nicole Judd Buntin, and husband, Robert of Greenville, SC; Ruth Judd of Austin, TX; Bryan Judd and wife, Crystal, of Charleston, SC; a sister, Sara Bailey, of Cowpens, SC; and a brother, Steve Lowrance, of Greensboro, NC. She is also survived by eleven great-grandchildren - Hampton and Savannah Tiller, Riley and Vance Jordan, Marley and Truus Buntin, Guthrie and Elory Vance "Winnie" Clark, Paisley and Ruby Clark, and Felix Judd. The family will receive friends from 11:00 AM until 12:00 PM on Wednesday, August 4, 2021, at First Baptist Church in Conway. A celebration of life will be held at 12:00 PM on Wednesday, August 4, 2021, at First Baptist Church with Reverend Brian Hoffman and Reverend Rocky Taylor officiating. Graveside services will be private. An online guest register is available at www.goldfinchfuneralhome.com Goldfinch Funeral Home, Conway Chapel is in charge of arrangements.

Treva Lowrance Greene, age 100, passed away on Monday, August 2, 2021, in her home in Conway, SC. A much-loved mother, grandmother, and sister, a trusted confidante, and a highly respected surgical nurse, she leaves behind family and friends... View Obituary & Service Information

The family of Treva Grey Greene created this Life Tributes page to make it easy to share your memories.

Send flowers to the Greene family.