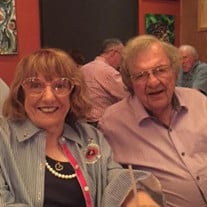 W. Scott Henderson: August 12, 1932 – July 19, 2021 Scott Henderson age 88, transitioned peacefully on Monday, July 19, 2021 at Georgetown Memorial Hospital. Scott was born in Santa Ana, California to Herman Harvey Henderson and Alice Irene Henderson. Losing his father at a young age, Scott was raised by his grandparents who owned a farm in Escondido, California. Graduating from Elsinore Naval and Military School Oxnard Military School in 1950, he then headed to the United States Merchant Marine Academy in Kings Point, New York. Scott graduated from the academy on February 25, 1955, and he and his wife of 66 years, Ella, were married on February 27, 1955. After completing two years with the U. S. Navy, The Mennen Company hired Scott as a lab technician, and 37 years later, he retired as the Director for International Research and Development. His international travel was extensive, with much of his time spent in the Latin American countries. Always an artisan at heart, Scott’s hobbies included building model trains and oil painting. In the early 1970’s he took an adult education class at the local high school and began creating stained glass lamps, a hobby he enjoyed for more than 30 years. After relocating from New Jersey to Pawleys Island, Scott began taking pottery classes and discovered the hobby that gave him so much joy in his later years. He especially loved creating glazes and working alongside the young students at Coastal Carolinas University. During his 20 plus years as a potter, he donated over 1,000 soup bowls to the yearly Soup-a-Thon food bank event. Scott was a voracious reader and a big fan of James Clavell and James Michener novels. Learning to play golf at the age of 60, he enjoyed playing the sport for over 20 years. He fed the birds and squirrels daily and loved living in Heritage Plantation. He was a devoted husband and father and never, ever lost his “California vibe.” Preceded in death by 43 days, his wife Ella; infant daughter, Pamela; half-brother, Russell Henderson; and sister-in-law, Janet Esposito. He is survived by his daughter and son-in-law, Tamara and Mike Paquée, brother-in-law, Gus Esposito, step grandchildren and step great grandchildren, nieces and nephews. A memorial service is planned for July 30 at 11:00 A.M. at Goldfinch Funeral Home, Litchfield/Pawleys Chapel. In lieu of flowers, Scott’s family requests donations be made to St. Mary’s Our Lady of Ransom, 37 Broad St. Georgetown, SC 29440 or to St. Cyprian Outreach 1905 Front St. Georgetown, SC 29440. Sign an online guestbook at www.goldfinchfuneralhome.com Goldfinch Funeral Home, Beach Chapel is in charge of the arrangements.

The family of W. Scott Henderson created this Life Tributes page to make it easy to share your memories.

Send flowers to the Henderson family.